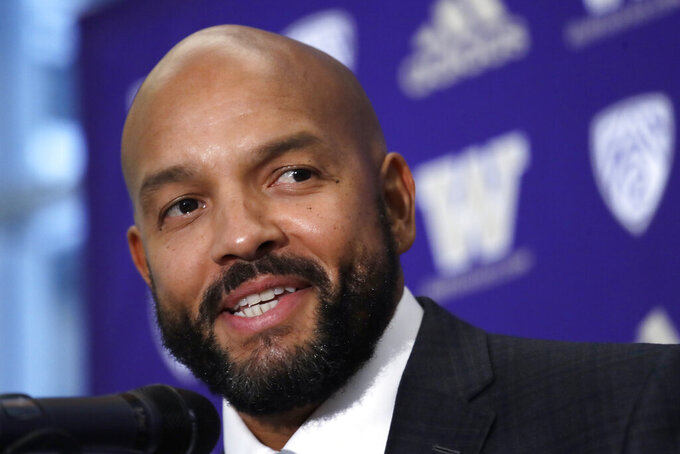 FILE - In this Dec. 3, 2019, file photo, Washington NCAA college football defensive coordinator Jimmy Lake speaks during a news conference about taking over the head coaching position, in Seattle. Just when it seemed like things were up and rolling, the COVID-19 pandemic hit. The ensuring national shutdown hurt coaches across college football as they prepare for next season, but it was particularly difficult on programs with first-year coaches trying to build something from the ground up. (AP Photo/Elaine Thompson, File)

As Pac-12 football coaches pitched an NCAA-mandated uniform start to the season, some of the latest plans to fight the coronavirus in California further muddled how college teams will return to play in the West.

Washington coach Jimmy Lake said Tuesday in a video conference with reporters that he would prefer for all major college teams to begin six weeks of preparation for the season at the same time.

"I’m of the opinion it would be great if the NCAA made a blanket rule for the whole nation of when we would start, and I understand some states may be less hit by this than most. And I’m sure there’s going to be some different opinions on this," Lake said. “In my opinion, I believe the NCAA should step in and say, ‘OK, here’s the date when everybody can start.'”

Colorado coach Karl Dorrell and Utah's Kyle Whittingham backed Lake's idea. For the season to start on time around Labor Day weekend, when Washington is scheduled to host Michigan, teams would need to begin six weeks of conditioning and practice in mid-July.

Meanwhile on Tuesday, a Los Angeles County public health official said, according to The Los Angeles Times, that the county's stay-at-home order is likely to extend through July. That could leave Pac-12 members USC and UCLA waiting until at least August before they begin preparing.

Also, the chancellor of the California State University system said he expects the vast majority of classes on the system's 23 campuses to be taught online in the fall. Shortly after that announcement, the California College Athletic Association, an NCAA Division II conference, suspended its fall sports season.

None of the Pac-12 schools are part of the California State University system, but San Jose State, San Diego State and Fresno State are all FBS schools competing in the Mountain West. Some CSU system schools such as Sacramento State and Cal Poly compete in FCS, Division I's second tier.

College sports leaders, including NCAA President Mark Emmert, have said college athletes can't return to campuses that are not open to the rest of the student body. What exactly constitutes an open campus has not been defined.

The NCAA doesn't have much authority over major college football. Conferences are taking the lead when it comes to how and when the season will start, with the Power Five commissioners at the forefront.

Even Emmert has acknowledged that it is probably not realistic to think that 130 major college football schools across 41 states — all taking different approaches to fighting COVID-19 — will be in position to start competing at the same time.

“I think there should be a blanket start as to when that six-week process or whatever time frame it is to prepare for your season (begins). I think the NCAA should govern that," said Dorrell, the former UCLA coach who took over at Colorado on Feb. 23.

Whittingham agreed with a uniform start to the season and that all teams should have the same minimum lead time to prepare. He also said he wouldn't want athletes in some states where restrictions have been loosened to be prohibited from taking part in some training and conditioning supervised by coaches.

“There’s imbalances and inequities all across the board in the NCAA, facility-wise, recruiting bases,” Whittingham said. “Nothing’s equal when you really look at it, and so I would hate to see athletes just sitting around that you could be training and getting ready for the season just because other places aren’t quite yet to that point.”

Knowing the season could be delayed or disrupted by the pandemic, conferences and schools are looking into all sorts of contingency plans.

USC coach Clay Helton said Monday the Pac-12 has talked about playing an all-conference, 11-game football schedule if necessary, but any decisions on what the upcoming season will look like are still weeks away from being made.

"I think where we are is the definition of a fluid situation," Stanford coach David Shaw said Monday.