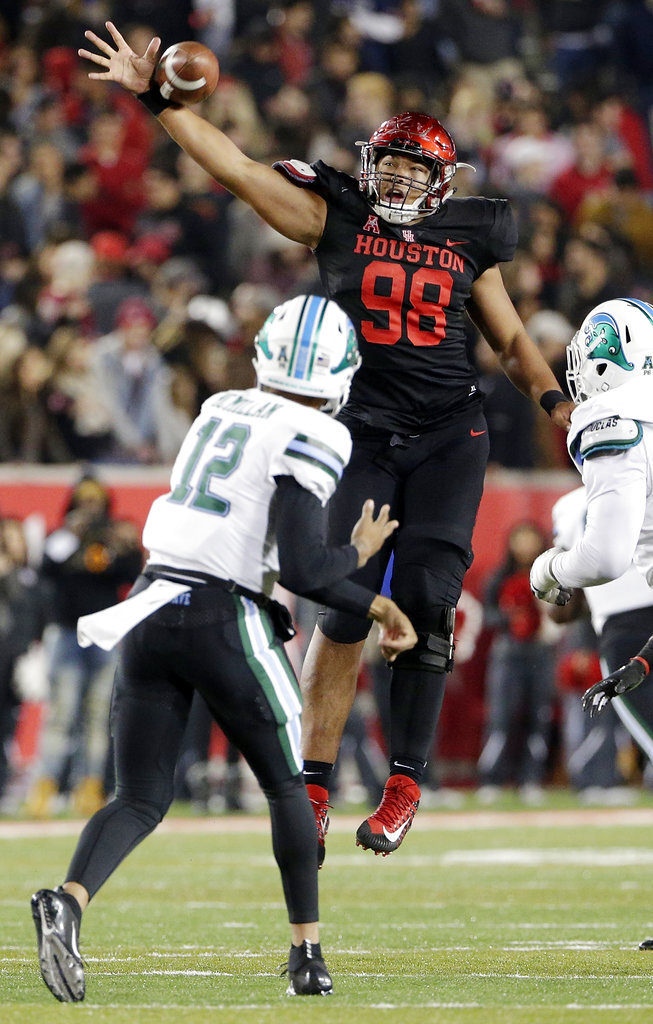 Houston defensive lineman Payton Turner (98) deflects a pass by Tulane quarterback Justin McMillan (12) that was intercepted by Houston linebacker Roman Brown during the first half of an NCAA college football game Thursday, Nov. 15, 2018, in Houston. (Michael Wyke/Houston Chronicle via AP)

HOUSTON (AP) — Patrick Carr ran for a career-high 139 yards and two touchdowns and Houston rolled to a 48-17 victory over Tulane on Thursday night.

Houston (8-3, 5-2 American Athletic Conference) rebounded from its only home loss, 59-49, to Temple last week. The Cougars conclude their regular season at Memphis on Nov. 23. Tulane (5-6, 4-3) had its three-game win streak snapped.

Carr broke loose for a 21-yard score and added a 3-yard touchdown run in the first quarter.

D'Eriq King, who entered the game accounting for a nation's-best 290 points and 35 touchdown passes, combined for 164 yards of offense with two touchdowns. He completed 11 of 15 passes for 82 yards and had 10 carries for another 82 yards. King threw an 11-yard TD pass to Romello Brooker and ran for a 3-yard score, each in the second quarter, to help the Cougars build a 31-9 halftime lead.

King was injured later in the game and was on the sideline with crutches during the second half.

Houston star defensive tackle Ed Oliver, who sat out his fourth straight game and was not in uniform against Tulane, was angry and shouting at Cougars coach Major Applewhite as the team left the sideline at halftime and did not return to the field for the second half.

Applewhite told ESPN that Oliver reacted to being told by the coach that he was not permitted to wear a long, heavy coat on the sideline because they were reserved for starters. Oliver hasn't played due to a knee injury.

Clayton Tune added two touchdown passes in the second half for Houston.

Darius Bradwell and Amare Jones had touchdown runs for Tulane, which had three interceptions and lost a fumble. Bradwell led the Green Wave with 89 yards rushing on 14 carries.