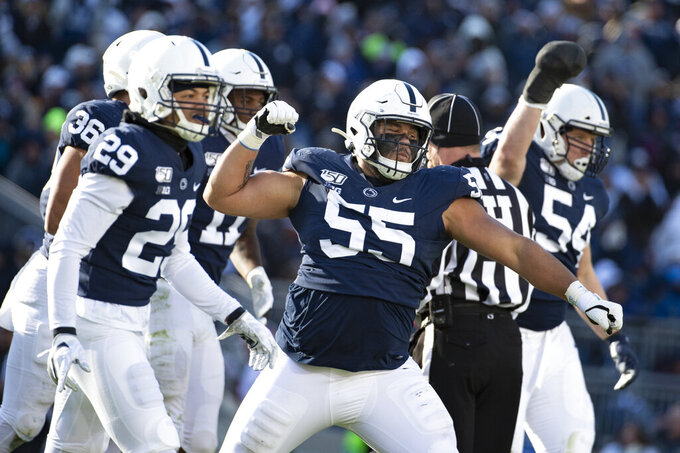 STATE COLLEGE, Pa. (AP) — As Penn State defenders huddled around their coaches, peering at play charts earlier this week, 11 teammates on the other side of the ball tried their best to mimic the eighth-ranked Nittany Lions’ next opponents.

But recreating the size, speed and ferocity of No. 2 Ohio State is virtually impossible. So is stopping the Buckeyes, who Penn State coach James Franklin said might be the best team he’s coached against.

So far, Ohio State has beaten every team it’s played by at least 24 points. The Buckeyes are favored by 18½ points for Saturday’s game in Columbus, Ohio, where a shot at a Big Ten championship and possible College Football Playoff berth will be on the line.

Franklin also believes his defense can play better than it has the last few weeks.

Over the last two weeks, the Nittany Lions lost at Minnesota and had to hang on to beat Indiana after surrendering a combined 58 points. In those games, Penn State’s secondary was burned for passing touchdowns of 66, 38, 36 and 21 yards and allowed 710 passing yards overall.

The secondary is full of upperclassmen in corners Tariq Castro-Fields and John Reid and safeties Lamont Wade and Garrett Taylor. All four were keyed-in, active and communicating during the portion of the team’s Wednesday practice open to reporters.

“We know what we want to do,” Wade said. “We’ll come together. We don’t really get flustered. We really don’t get frustrated about anything.”

But Ohio State quarterback Justin Fields has proven to be a grating assignment for everyone thus far.

The Buckeyes quarterback is completing nearly 70% of his passes, with 31 touchdowns and just one interception. He also adds a rushing element unlike any quarterback Penn State has faced thus far.

“He's special, of course,” Penn State defensive end Shaka Toney said. “We have to do whatever we have to do to try to keep him in check.”

Most of the year, when four-man pressures haven’t done the trick, Penn State has turned to heavy blitz packages. All three of the team’s starting linebackers factor in on extra-man pressures while Wade, Castro-Fields and Reid have all brought heat from different alignments.

That versatility has made Penn State’s defense dangerous and unpredictable to a point, but lately opposing quarterbacks have caught on.

Indiana’s Peyton Ramsey caught Wade blitzing a week ago and fired an easy 38-yard touchdown pass in the first quarter. Similarly, Minnesota quarterback Tanner Morgan survived the blitzes to pass for 339 yards and three touchdowns. Penn State, which racked up 30 sacks through its first eight games, has just three over its past two.

“Is this a trend when we go back and look at it?” Franklin said. “I wouldn't necessarily say that's the case. We've made some mistakes that we can't make. We've played good enough opponents that they've taken advantage of it.”

Franklin expects Ohio State to find and exploit his team’s weaknesses. The question is how Penn State will respond.

“Don't be shocked by that,” Franklin said. “They're going to make plays, we got to match them. It needs to be one of those types of games, like a heavyweight fight. That guy delivers a blow, you counter. That's what it's going to need to be.”