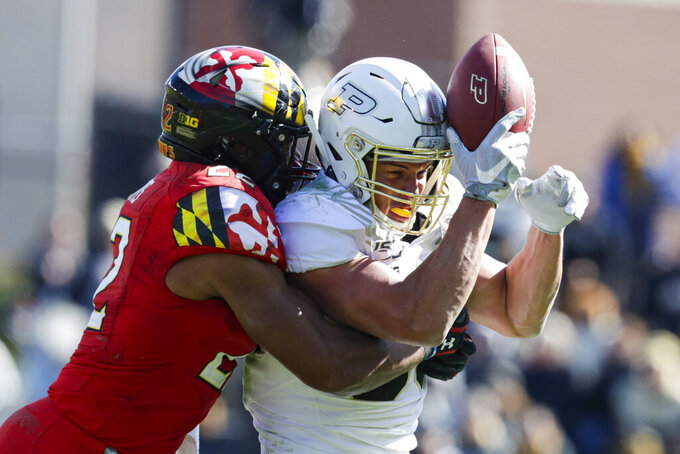 He plugged in three new starters on the offensive line and cobbled together a winning combination.

Jack Plummer threw for 420 yards and three touchdowns, both career highs, and Cory Trice returned the first of his two interceptions for a 37-yard score late in the first half to help Purdue pull away from Maryland 40-14.

"Today I thought we came out and played freer and looser and I think we found some things that worked," coach Jeff Brohm said after the Boilermakers snapped a three-game losing streak.

He needed to do something after allowing 10 sacks in last week's loss at No. 12 Penn State and Minnesota quarterback Tanner Morgan to complete all but one pass the previous week, Brohm started over.

So Brohm plugged in Mark Stickford at left guard, Sam Garvin at center and redshirt freshman Eric Miller at right tackle. The results could not have been any better.

Plummer took advantage of his protection by repeatedly finding open receivers. He finished 33 of 41 and was only sacked once while receivers Brycen Hopkins and David Bell each topped the 100-yard mark.

King Doerue was equally effective on the ground, carrying 19 times for 69 yards and a score as the Boilermakers churned out a season-high 127 yards rushing.

The changes paid off on defense, too.

Trice, who has started the last two games at cornerback after moving from safety, became the first Purdue player since the 2016 season finale with multiple interceptions in a game and changed the game when he jumped in front of Chigoziem Okonkwo, picked off the pass and ran 37 yards for the score to make it 30-14 with 18 seconds left in the half.

"A lot of things worked," Brohm said. "New people are stepping up, it's a credit to the guys we put in and what the coaches put in."

Maryland (3-3, 1-2) struggled with Tyrrell Pigrome starting in place of Josh Jackson at quarterback.

Purdue led 13-0 after only two possessions, forcing the Terrapins to play catch-up the rest of the day.

Javon Leake cut the deficit to 13-7 with a 21-yard touchdown run early in the second quarter but Plummer answered by hooking up with Milton Wright for a 59-yard TD pass,

Pigrome fooled the Boilermakers on the next series when he faked a run up the middle on third-and-1, kept the ball, turned the right corner and sprinted 61 yards to make it 20-14.

But after J.D. Dellinger's short field gave Purdue a 23-14 lead, Trice scored on the interception and Maryland never recovered. Bell sealed Purdue's victory with an 8-yard TD pass early in the fourth quarter.

"It was bad execution," Leake said. "It was on us to start the game off (better. There are a lot of things that we have to correct."

Maryland: The Terps' rocky season continued. After two lopsided wins, Maryland has lost three of four. And now they must deal with a daunting schedule that takes them to Minnesota, No. 3 Ohio State and Michigan State and also includes a home date with No. 16 Michigan.

Purdue: The Boilermakers cobbled together a winning formula — perhaps in time to salvage their postseason hopes. A fourth consecutive loss would have sent Purdue into the second half of the season needing to win five of six. This victory gives them confidence, momentum and a slightly larger margin for error.

Maryland: Pigrome was 21 of 39 with 218 yards and two interceptions and also ran 13 times for 107 yards. ... Leake had seven carries for 79 yards while Dontay Demus Jr. caught 10 passes for 105 yards. ... The Terrapins extended the nation's second-longest streak of consecutive games forcing a turnover to 18.

Purdue: Bell had nine catches for 138 yards and two scores. Hopkins had 10 catches for 140 yards, both career highs. ... Hopkins is the first Purdue tight end with double-digit catches in a game since Tim Stratton in the 2001 Sun Bowl. He also had his third career 100-yard game.

Purdue celebrated the 50th anniversary of Neil Armstrong's moon walk by wearing moon-themed uniforms and helmets Saturday About 10 astronauts also were honored during the halftime festivities.

Purdue: Visits No. 17 Iowa next Saturday.