Purdue tries to plug leaky run defense with Nebraska up next 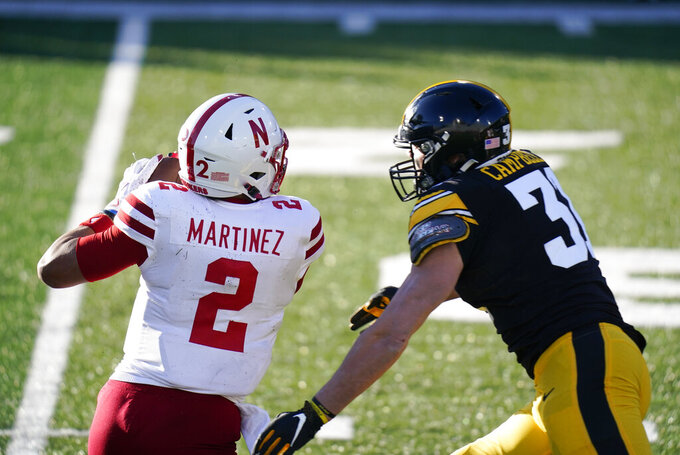 So in hopes of avoiding a repeat of last week's debacle, Brohm decided to spend part of this week finding a solution for his defense.

“I need to do the best job I can of being involved in all aspects of our game," he said. “We want to make sure that we put a plan together that has the resources available to stop the run, to get penetration, to put pressure on the quarterback and to challenge the offense and not let them sit back there and do what they want."

A week ago, the Scarlet Knights pretty much did whatever they wanted in the second half. Johnny Langan had 21 carries for 95 yards, completed all three of his passes for 84 yards and one score and he repeatedly extended fourth-quarter drives by steamrolling the Purdue defense.

The combination of Martinez and McCaffrey present an even tougher matchup. Those two have combined for more than half of the yards rushing by the Big Ten's No. 5 rushing offense (187.6 yards per game).

McCaffrey has led the Cornhuskers in rushing four times this season while Martinez topped the chart in Nebraska's other game. Even at 1-4, with three games left, the Cornhuskers plan to dig deep to salvage something from this season.

Purdue's defense hasn't been bad this season. It ranks sixth overall in the Big Ten and eighth against the run.

But three opponents have topped the 170-yard mark and a fourth, Minnesota, ran for 130 yards and five touchdowns. Brohm knows that to win, the Boilermakers (2-3) must tighten up their run defense.

“Any time you’re not good at something, we’ve got to evaluate exactly what we’re doing and how we’re doing it, and put the best package we can together," Brohm said. “Then our players have to go out and play tough and physical, and there have to be times where people man up and say ‘I’m going to get a stop.'"

Purdue suffered a big blow in last week's loss when starting linebacker Derrick Barnes was ejected in the second half for targeting.

This week, Brohm acknowledged he understood why the call was made though he wouldn't have made the same call. But the penalty will have a carryover impact with Banes forced to sit out the first half of the Nebraska game, too.

“It’s just one of those things that Derrick tried to make a hard play and a hard tackle, and you know, maybe his helmet hit before the rest of his other body did," Brohm said.

Barnes leads the team with 32 tackles and has 3 1/2 tackles for loss this season.

The game presents Nebraska with another odd twist in an already strange season — its first regular-season game in December in exactly 28 years. The Cornhuskers took on Kansas State on Dec. 5, 1992, in Tokyo. Since then, the Cornhuskers have had 17 contests in December — six conference title games and 11 bowl games. The game Saturday will end Nebraska's 18-game streak of December games at neutral sites.

Now that Purdue receivers Rondale Moore and David Bell are both on the field, it seems both are making big plays every week. So is the rest of the league.

This week's version features Nebraska sophomore Wan'Dale Robinson, who is averaging 6.0 receptions per week — tied for fifth in the league. He's also topped the 100-yard mark from scrimmage each of the past two weeks.

Bell leads the conference in receptions per game (8.6) and is third in yards per game (98.6). Moore has 22 catches for 192 yards in two games but doesn't yet qualify to make the Big Ten leaders list.