Purdue's perseverance on full display as wins pile up 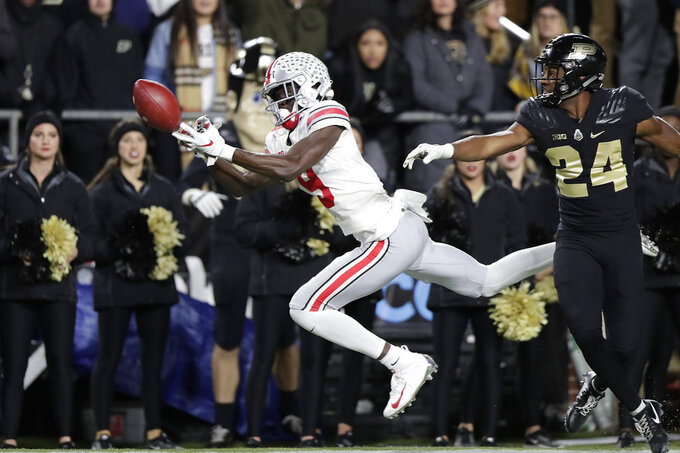 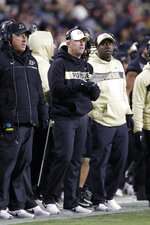 WEST LAFAYETTE, Ind. (AP) — Six weeks ago, the notion of Purdue fans swarming the field seemed about as far-fetched as beating Ohio State.

After losing to Eastern Michigan on a last-second field goal, the season appeared lost, their bowl hopes shattered and the troubling turnovers, mounting mistakes and persistent penalties continued to pile up. Then the Boilermakers dug down, fought back and turned things around.

Purdue is just one-half game out of the Big Ten West lead.

Make no mistake: Brohm meant no offense to the Eagles; he merely wanted to illustrate how his players and coaches rebounded after losing that game and the next one, to Missouri, on last-second field goals.

Since then, the Boilermakers (4-3, 3-1) have turned around their season.

The reward for this sudden season to remember was getting 17 points in Top 25 voting — making them No. 33.

"It means guys are growing up," said running back D.J. Knox, who had scoring runs of 1, 42 and 40 yards Saturday. "When you have guys locked in and everybody working for a common goal, you can't be stopped. Especially the defense. They played lights out against a quarterback (Dwayne Haskins Jr.) who's a Heisman candidate."

Knox and Markell Jones have given Purdue a strong, experienced one-two punch out of the backfield. David Blough is 135 of 224 (60.3 percent) with 1,951 yards, 13 touchdowns and only two interceptions since replacing the injured Elijah Sindelar as the starting quarterback in Week 3. Freshman receiver Rondale Moore continues to be a matchup nightmare for opposing defenses, and Purdue has pulled no punches in calling plays.

"Once we decided to open this thing up and stay on the attack and be more aggressive, our guys have done a great job," Brohm said Monday. "It's not always going to be perfect, but I think David has played outstanding."

The Boilermakers' defense has done its part, too.

After allowing 91 points in the first three games, all against unranked foes, the last four opponents scored 68 points. Ohio State came up short of even half its scoring average.

And after making too many mistakes early, the Boilermakers just keep making plays.

"It's all a part of putting your head down and breaking it up or taking it out of the receiver's hands," cornerback Antonio Blackmon said after making three plays in the end zone against Ohio State.

Now comes the hard part — proving the biggest win of Brohm's brief tenure was no fluke. By winning Saturday at Michigan State, the Boilermakers could cement their status as a surprise conference contender heading into November when they host No. 18 Iowa and No. 20 Wisconsin with visits to Minnesota and rival Indiana.

Brohm believes Purdue learned a valuable lesson from its tough start, one that should help the Boilermakers move on from Ohio State and focus on their next big challenge — sustaining success.

"These guys (the Spartans) will come in hungry and fired up for a win, and we're going to have to respond and play a clean football game," Brohm said. "I know our guys will be able to get back to work (Tuesday) on the practice field and we'll work as hard as we can to try to find a way to win this game."