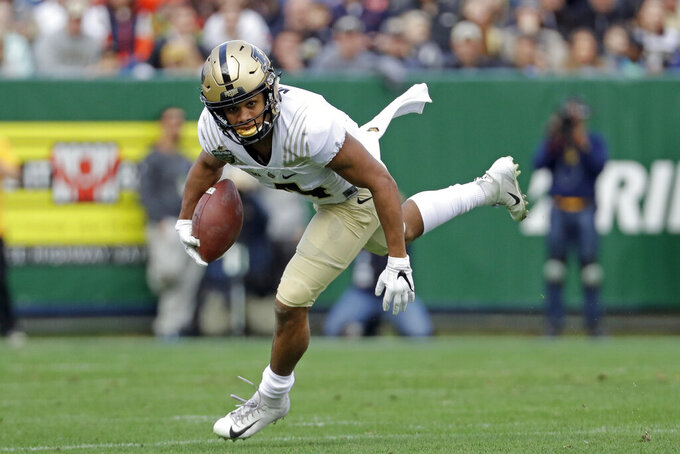 FILE - In this Friday, Dec. 28, 2018, file photo, Purdue wide receiver Rondale Moore carries the ball against Auburn in the first half of the Music City Bowl NCAA college football game, in Nashville, Tenn. Moore, who is being tabbed as a Heisman Trophy candidate after his breakout freshman season. (AP Photo/Mark Humphrey, File)

Purdue heads into its season opener with a new-look offense and a whole lot of questions.

With many key veterans and familiar faces having departed, the Boilermakers find themselves searching for answers heading into Friday night's season opener at Nevada. And it starts right up front.

"I think our offensive line has worked hard," coach Jeff Brohm said Monday at his first news conference of the season. "It's never going to be a finished product, especially when we have a lot of inexperience. We can't get down on them, we've had some struggles, but I think it's important they struggle some in camp."

Brohm has never been prone to sugarcoating critiques, and he's not about to start now after taking Purdue to bowl games each of his first two seasons.

This year, though, the early season is all about plugging holes.

Yes, a healthy Elijah Sindelar reclaimed the starting quarterback job in camp and will be operating with a top-flight group of proven receivers that includes playmaking All-American Rondale Moore.

The hope is Sindelar provides stability now that his close friend, David Blough, is off to the NFL.

"I think he (Sindelar) understands he's done some very good things here and a few things he has to work on," Brohm said, citing ball security and turnovers as the priorities. "I do think he has made strides in camp. He understands he has to make more. I think this past week has been his best week as far as not turning it over."

Sindelar's progression is only part of the equation, though.

Fifth-year senior Tario Fuller, the projected starter at running back, is out indefinitely with a fractured jaw, pushing sophomore Zander Horvath into the lineup at least until Fuller returns. Horvath and Sindelar will both be working behind a young offensive line with three new starters including redshirt freshman Will Bramel at right tackle and sophomore Viktor Beach at center.

It's not just the offense dealing with lineup changes.

"He's gotten in better condition, he's dropped weight, he's got a lot of repetitions," Brohm said. "I think he wants to play well. He loves football, wants to compete, wants to represent Purdue in the best way we can. We're excited to get him on the field."

Still, the biggest concern remains the offensive line, which serves as the building block on which everything functions in Brohm's creative, high-scoring offense.

Brohm will likely make some adjustments to help Sindelar and the ground game get into an early-season groove, but Brohm also understands it's going to require patience, consistency and steady improvement to make it right.