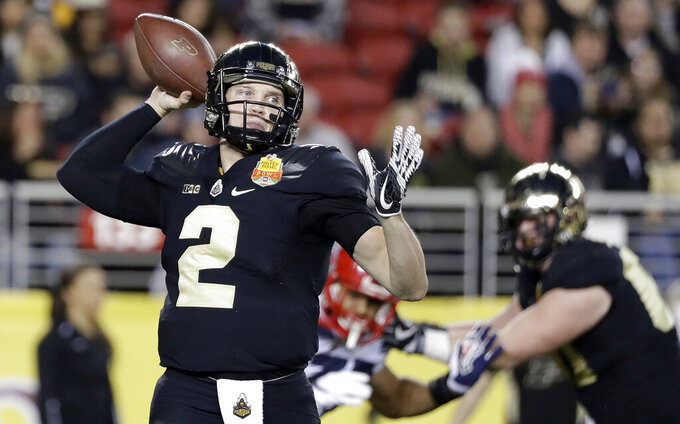 FILE - In this Dec. 27, 2017 file photo, Purdue quarterback Elijah Sindelar, left, throws against Arizona during the first half of the Foster Farms Bowl NCAA college football game in Santa Clara, Calif. Sindelar sees a whole new world of opportunities opening up this fall. The annual competition he waged against David Blough is finally over, his problematic left knee finally seems healthy and his class load finally is a little lighter now that he has an engineering degree. (AP Photo/Marcio Jose Sanchez, File)

The annual competition he waged against David Blough is finally over, his problematic left knee finally seems healthy and his class load finally is a little lighter now that he has an engineering degree.

So the next goal for the strong-armed Sindelar is simple: Show everyone how well he can play when he focuses on football.

"My decision-making has definitely gotten a lot better, being able to check it down," he said after a recent practice. "A lot of times where the first read might not be there and I still tried to kind of force it when I was younger; today I actually got through my fourth progression in one play, which was really nice to go 'one, no; two, no; three, no; four, yes,' and throw the ball. That's what I'm most proud of right now."

Coaches also appreciate Sindelar's toughness, especially in a college football world where a lack of instant gratification has created a whirlwind of transfers.

Sindelar is different, an old-school guy who just keeps fighting, studying and improving.

And while Kentucky's 2014 Mr. Football award winner won't make every throw, he looks like a perfect fit for coach Jeff Brohm at the Cradle of Quarterbacks.

"He works hard, he's a good leader," Brohm said. "I do think he's got a lot of talent. He has a big arm. He can throw the ball vertically. We've got to do a better job of coaching him where we can limit the turnovers and making sure he's taking care of the football."

Sindelar knows what must improve. He wants to cut down on the turnovers and complete 70% of his attempts.

But the fact he's still chugging along in West Lafayette might be more remarkable given the way things have not gone according to script.

Sindelar enrolled at Purdue in January 2015, expecting Danny Etling and Austin Appleby to battle for the starting job while he and Blough fought to be the backup to the backup.

Things changed when Etling transferred to LSU in the summer, essentially ceding the job to Appleby. Four weeks into the season, Blough relieved the struggling Appleby and wound up starting the next 20 games before Appleby left for Florida amid a coaching change.

Blough lost his lock on the starting job when Brohm reopened the competition in 2017 and Sindelar and Blough essentially played to a draw. Eventually, Brohm decided to use the close friends in a rotation that ended when Blough suffered a season-ending dislocated right ankle in early November.

Then, less than one half into Sindelar's first game as the undisputed starter, he tore the anterior cruciate ligament in his left knee. He refused to come out in a game the Boilermakers lost.

Sindelar rebounded by winning the next two games on his bad knee to make Purdue bowl eligible and seven weeks later was named the offensive MVP of the Foster Farms Bowl — Purdue's first postseason victory in six years. That's when Purdue announced the extent of the injury, which continued to cause problems for months.

He missed all of spring practice in 2017 following surgery. He felt soreness in the knee, which limited his mobility, in the team's first practice that summer. And after starting the opener and playing in the second game last season, Sindelar never took another snap. A hyperextended knee also limited him in practice this spring.

But a 30-minute pre-practice routine has so far kept Sindelar's knee healthy. And Purdue hopes the lack of a full-fledged competition against backups Jack Plummer and Nick Sipe may help Sindelar relax in his fifth and perhaps final season at Purdue.

"I think there is some comfort in knowing that maybe he doesn't have to stress about every mistake," quarterbacks coach and co-offensive coordinator Brian Brohm said. "If you look at the two quarterbacks over the last two years, each one of them played actually a little bit better when the other was out."

Sindelar intends to prove it wasn't a fluke.

"You've got to be ready to play and perform well at a high level every day or you're not going to play," said Sindelar, who has been granted a sixth year of eligibility by the NCAA. "But it helps to know that you're just the guy."