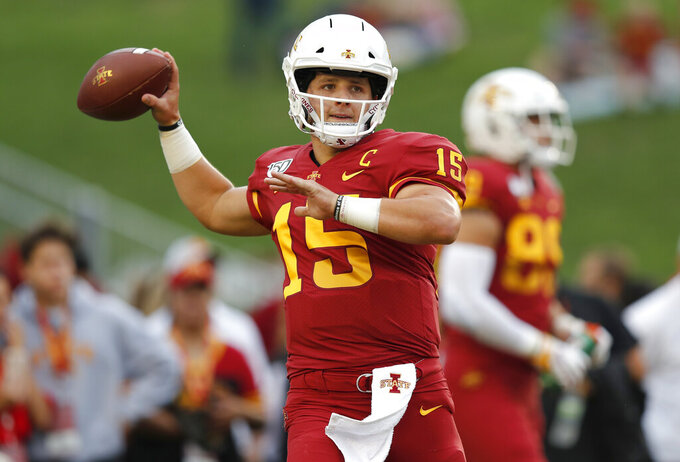 AMES, Iowa (AP) — Seeing Charlie Kolar is Iowa State's second-leading receiver might not raise many eyebrows until you consider his position.

Kolar is a tight end, a position Iowa State has not targeted much in recent years. Two years ago, Cyclones tight ends went through an entire season catching only five passes.

Kolar already has caught 14 passes, three more than all last year, and his average of 4.7 receptions per game ranks fifth among all tight ends nationally.

With big-play wide receiver Hakeem Butler no longer around, Kolar, Chase Allen and Dylan Soehner saw an opportunity to get more involved as receivers and they're making it happen. They're also earning the trust of quarterback Brock Purdy, who has gone to Kolar several times in key situations.

"Part of it is just how the ball drops," Kolar said Tuesday. "Last year, I feel like we were a part of the offense, (but) I know the numbers are bigger this year than they were in the past. We're growing. All three of us are playing well right now. We're getting older, getting more experience, getting more comfortable with Brock. That will just continue to help us out."

Allen, who has struggled to stay healthy for an entire season, was a second-team all-Big 12 selection two years ago. He has three catches this year and Soehner, used mostly on special teams a year ago, has two. Those 19 combined catches through three games come after the tight ends totaled 25 receptions in 12 games a year ago.

"There's a lot of options now, especially on third down," Kolar said. "It's a chance for us to thrive. We're big bodies. We catch balls over the middle. We're big targets. So yeah, I think we definitely saw roles that we could possibly grow in and we're trying to get better at. We'll just keep trying to work at it."

It's a smart group, too. Kolar has a 3.9 grade-point average in engineering, Allen has a 3.5 in engineering and Soehner a 3.8 in business.

"They're highly intelligent young people," coach Matt Campbell said. "So I think what you are getting is the whole package with that group. They are great students of the game as well as great competitors on the field."

Campbell has challenged the tight ends in the past, saying if they want the ball thrown their way, they had to prove they could produce when the team needed a big play. He's seeing that happen now.

"As we went into the spring, knowing that we needed to make some changes to involve them in our offense, I thought you could see their intent and intensity continue to grow," he said. "It's been really rewarding because I think those guys are proving it. The neat thing about them is none of them are a finished product, either. They're only going to continue to get better."

Iowa State athletic director Jamie Pollard said he and his Iowa counterpart, Gary Barta, are committed to continuing the football series between the two schools despite allegations that Iowa marching band members were mistreated at this month's game in Ames. Pollard said at a news conference it was inexcusable that band members were verbally harassed and perhaps had beer thrown on them, which he said has happened to Iowa State band members when they played at Iowa. But he said university investigators have been unable to substantiate five allegations forwarded by the Iowa administration and bristled at reports that something more serious, such as assault, had happened.

Nothing beyond the five incidents has been reported to either school, Pollard said.

"It's difficult to launch an investigation if no one comes forward," said Michael Newton, Iowa State's associate vice president for public safety and chief of campus police.

Pollard also implied the Iowa band left the field after the game through the wrong exit. Instead of leaving on the east side through an empty gate, the band marched, instruments playing, through the west gate, which was jammed with fans inching along shoulder to shoulder. He said the band "essentially forced their way through the crowd where there was no place for anybody to move to."

Campbell said running back Kene Nwangwu and center Colin Newell are questionable for Saturday's game at Baylor, though both practiced on Sunday. Nwangwu has a sore hamstring and left shoulder that limited his time in last Saturday's 72-20 victory over Louisiana-Monroe. Newell injured a knee in the third overtime of the Cyclones' season-opening victory over Northern Iowa and hasn't played since.