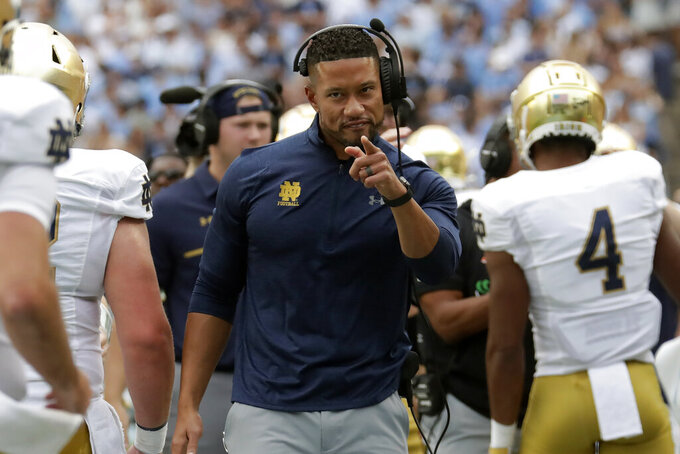 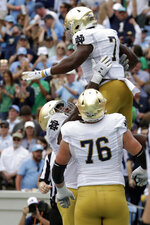 Audric Estime rushed for two touchdowns and 134 yards and Chris Tyree ran for 80 yards and a score for the Fighting Irish (2-2). Pyne completed 24 of 34 passes for 289 yards.

“We focused all week on executing,” Pyne said. “We scored on a lot of drives and it all starts with the O-linemen.”

The outcome resulted in the first road win under first-year coach Marcus Freeman.

The way the Irish attacked offensively by relying on the offensive line is how Freeman envisions a Notre Dame offense.

“It’s what you hope Notre Dame football is going to be about,” Freeman said. “We’re preparing better. The result of that preparation is what you saw today.”

North Carolina quarterback Drake Maye threw five touchdown passes, two going to Josh Downs in the first half and two more – covering 144 yards -- to Antoine Green in the second half. Maye was 17-of-32 for 301 yards.

“It is a big learning experience,” Maye said. “We didn’t come out ready to play football in the second half. Big games like this, we’ve got to show up.”

With 576 yards of total offense, the Irish produced lots of positives.

“The beauty of it is there is always room to do better,” Freeman said.

“Getting the ball in his hands is something our team can really benefit from,” Pyne said.

NICE TO KNOW YOU

Notre Dame, which has a scheduling agreement with the Atlantic Coast Conference and played as a league member during the pandemic-impacted 2020 season, has won 25 consecutive regular-season games against ACC opponents. This was the first of four meetings against ACC members this year.

AN AREA TO TARGET

After eight penalties a week ago against California, Notre Dame was flagged for just five infractions for 46 yards. But a targeting call with 11:46 remaining against captain JD Bertrand proved costly.

The linebacker, who sat out the first half Saturday because of a targeting call a week earlier, will have to miss the first half of the Brigham Young game. Freeman said there needs to be an emphasis on proper tackling technique during the extra week before the Irish hit the field again.

“We have to understand that’s the way the refs call it,” Freeman said.

Notre Dame: The Fighting Irish unleashed a balanced offense, producing more than 285 yards both on the ground and in the air. After three games with tight margins into the fourth quarters, this turned out to be a relatively stress-free final 15 minutes.

North Carolina: The Tar Heels were coming off an open week, but they didn’t solve defensive woes that threatened to derail them in their previous two games. They’re done with non-conference games, so they’ll have to sort out the defensive shortcomings in ACC play.

Notre Dame has more work to do before reappearing in the Top 25, but this was a strong step. The Irish spent the first two weeks in the Top 10 and then tumbled out of the poll following a home loss to Marshall.

North Carolina had moved just a few spots away from the Top 25, and a victory Saturday might have lifted the Tar Heels into the rankings. Instead, they’re headed in the other direction.