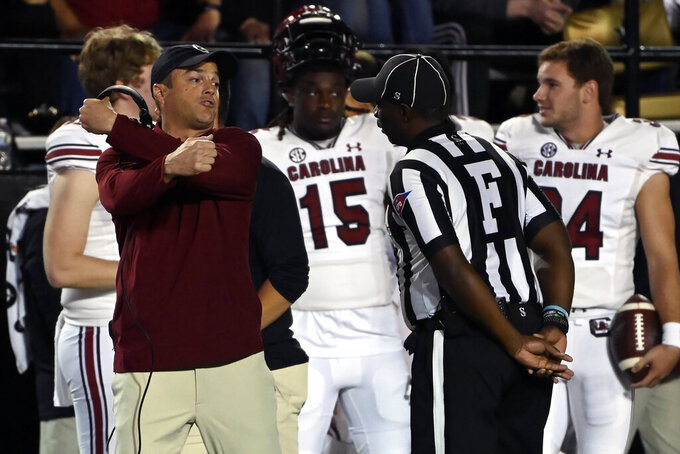 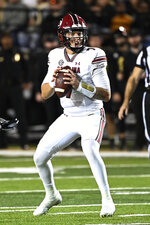 “I think it’s a huge accomplishment, I really do,” Gamecocks coach Shane Beamer said of his team’s bowl eligibility. “For this team to have two wins two years ago and now we just got bowl eligible with three games to go for the second year in a row is a testament to the leadership that we have in this room and the resiliency.”

Rattler threw a 29-yard TD pass to Xavier Legette, a 19-yard TD to Josh Vann and a 17-yard TD to Antwane Wells.

The Commodores suffered their 26th consecutive SEC defeat despite a career-high 167 rushing yards from senior running back Ray Davis, a Temple transfer.

“Disappointed in the game, disappointed in the result,” Vanderbilt coach Clark Lea said. “We knew that we weren’t going to be able to find the success we wanted turning the ball over. Obviously, that became an issue. The game for us comes down to turnovers and tackling.”

South Carolina scored 10 points off turnovers in the first quarter.

Darius Rush intercepted an underthrown pass by AJ Swann at the Gamecocks 30-yard line, setting up the game’s first touchdown.

Five plays later, Legette got behind the coverage in the middle of the end zone for a 29-yard scoring strike from Rattler to give South Carolina a 7-0 lead.

The teams traded long TD passes before Swann fumbled during a sack at the Commodores 17, setting up Mitch Jeter’s 31-yard field goal which extended the Gamecocks’ lead to 17-7 with 21 seconds left in the first quarter.

South Carolina: The Gamecocks’ offense rambled for 492 yards and never trailed. South Carolina faces a difficult finish with games against Florida, No. 2 Tennessee and No. 5 Clemson.

Vanderbilt: Defense continues to be a problem for the Commodores, who have allowed 38 or more points in four of their last five games. Three tough games remain for Vanderbilt: Kentucky, Florida and Tennessee.

Gamecocks cornerback Cam Smith and Commodores wide receiver Will Sheppard were flagged with personal fouls after getting into a shoving match with 37 seconds left in the first half. Players from both teams surrounded Smith and Sheppard during the scuffle.

The teams appeared to be yelling at each other from close range as they jogged to their locker rooms for halftime, but nothing escalated beyond that.

Vanderbilt visits Kentucky in its final road game of the season on Saturday.