RB Who? Pitt trying to find answers during spring drills 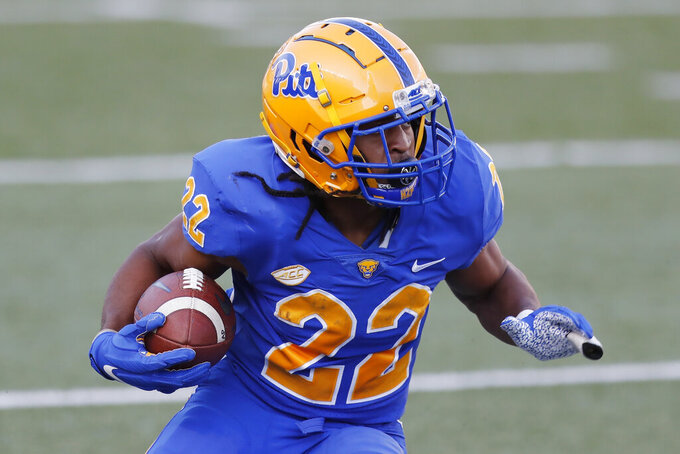 FILE - Pittsburgh running back Vincent Davis plays against Boston College during the first half of an NCAA college football game in Boston, in this Saturday, Oct. 10, 2020, file photo. Pittsburgh has long considered itself “RB U,” a testament to the school’s long tradition of producing high-profile running back. Not so much lately. (AP Photo/Michael Dwyer, File)

PITTSBURGH (AP) — Pat Narduzzi thought he had things figured out when the Pittsburgh coach tabbed Vincent Davis as the team's top running back during spring drills.

Turns out, maybe not so much. And that's a good thing for a team in serious need of offensive balance.

Sophomore Israel Abanikanda has turned heads — including Narduzzi's — over the last few weeks. So much so that Narduzzi's early proclamation that the top spot was locked up heading into fall camp no longer holds.

“Who’d I say was the starting tailback at the beginning of spring? Vince Davis, right? Eh, not so fast,” Narduzzi said. "I shouldn’t say stuff like that. You sit there and declare something, and all of a sudden Izzy is coming on. Vince is still a good back. But Izzy Abanikanda is getting after it. We’re happy with where he is. There’s a battle going on.”

One that likely won't be decided anytime soon no matter how well either fare in Saturday's spring game.

"Izzy is getting after it,” Narduzzi said. “I sit there and declare a winner in pre-spring ball, and maybe that lit a fire under Izzy.”

There needs to be a fire lit if Pitt's offense wants to find some semblance of balance to take the pressure off quarterback Kenny Pickett. The Panthers moved to a more pass-centric attack when offensive coordinator Mark Whipple came in 2019 and the running game has basically vanished.

When the passing game is working, that's not an unmanageable situation. When it doesn't — and it didn't last season when Pickett went down with an ankle injury — it can make for lopsided outcomes. The Panthers ran for 82 yards combined in losses to Miami, Notre Dame and Clemson last season.

Davis ended up leading the team with 632 yards and six touchdowns, including a whopping 247 yards in a season-ending win over Georgia Tech. Yet it was just one game over the course of two seasons. The running game has been more miss than hit. It's telling that at times the most effective runner last season was Pickett, who collected a team-high eight rushing touchdowns.

Still, center Owen Drexel — tasked with replacing longtime starter Jimmy Morrissey — is confident the Panthers can find the grittiness they've lacked in recent seasons. Drexel said Abanikanda has “the whole toolbox and he's really getting to start using it."

Maybe, but it won't just be Abanikanda or Davis' job to get the Panthers going. It comes with a collective mindset.

“Every spring (the running game is) always an emphasis but I feel like, what I was trying to bring the guys was a mentality and physicality,” Drexel said. “We would always try to finish guys."

The mission is not just limited to the line. One of the reasons Narduzzi believes Abanikand has taken such big strides over the last month is for all the things he does when he doesn't have the ball in his hands. Namely, make sure he's helping keep Pickett upright.

“We knew he could always run,” Narduzzi said. “The thing about Izzy is, he’s picked up the pass protections. He’s gotten more mature that way. He’s understanding you can’t just carry the ball and score touchdowns. You have to be able to protect our quarterback, and he’s done that a lot better than he did a year ago.”