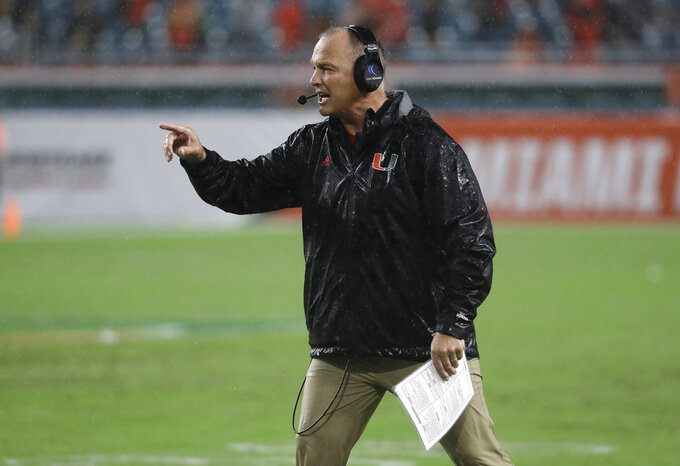 In this Nov. 3, 2018 photo, Miami head coach Mark Richt calls out during the first half of an NCAA college football game against Duke in Miami Gardens, Fla. Midway through this season, a mid-November 2018 matchup between longtime rivals Miami and Virginia Tech seemed likely to have major implications in the ACC's Coastal Division race, if not nationally. Both teams would love for that still to be the case. (AP Photo/Lynne Sladky)

Midway through this season, a mid-November matchup between longtime rivals Miami and Virginia Tech seemed likely to have major implications in the ACC's Coastal Division race, if not nationally.

That will not be the case Saturday.

Eight teams in the Atlantic Coast Conference have already qualified for a bowl game, and neither the Hurricanes (5-5, 2-4) nor the Hokies (4-5, 3-3) are among them. Instead of contending for a title, both are hobbling noticeably to the finish.

"Both teams obviously haven't won in a while," Hurricanes coach Mark Richt, whose team won the division for the first time last season, said this week. "Everyone is battling for that victory. I can promise you our guys are battling, our coaches are battling and we're looking forward to another opportunity to play a game."

The Hokies are, too — perhaps more games than are currently on their schedule.

Because East Carolina opted not to make the trip to Blacksburg, Virginia, for a game early in the season because of an impending hurricane, the game against Miami and next Friday's traditional Thanksgiving week matchup against Virginia will leave the Hokies with 11 games. If they win them both, they would extend their streak of consecutive seasons ending in a bowl game to 26. If they lose either, they could add a 12th game on Dec. 1.

Fuente, however, also said he's less worried about extending the Hokies' bowl streak than he is about getting them playing better, and with a very young and very banged up defense, that has been increasingly challenging.

In three of their last four losses, they have allowed at least 45 points. In two, at least 465 rushing yards.

"They're anxious to prove, as the whole team is, that they can play better football," Fuente said.

Here are some things to watch for when Miami visits Virginia Tech:

The Hokies Ryan Willis ranks fourth in the ACC with 221 passing yards per game and has thrown for 13 touchdowns with just three interceptions since replacing the injured Josh Jackson behind center. The Hurricanes will arrive with the nation's No. 4 overall defense (269 yards per game) and No. 2 passing defense (134 ypg).

The Hurricanes penchant for creating turnovers gained great notoriety last season when they unveiled the turnover chain worn by any player who came up with a turnover. They have caused 20 turnovers this season, 14th among FBS teams, but have also turned the ball over 19 times. They lead foes in points off turnovers 79-52.

The Hurricanes have allowed their opponents just 13 touchdowns in 29 trips inside their 20 yard-line, or 45 percent. The Hokies have converted 20 of 27 trips inside the red zone into touchdowns, or 74 percent.

Damon Hazleton, a transfer WR from Ball State, leads the Hokies with 40 receptions for 687 yards and has made them count. Hazleton leads the ACC with eight touchdown catches. His next touchdown reception will break a tie with Ricky Hall (1998) for most touchdown catches by a Hokies player in his first season.