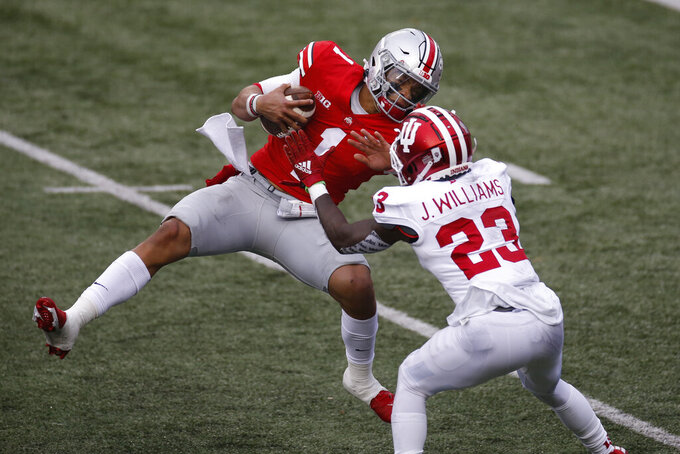 COLUMBUS, Ohio (AP) — Justin Fields and Ohio State are scoring points by the truckload, as expected, but cracks in the defense have made for some unsatisfying finishes of late for the No. 3 Buckeyes.

They haven't let one slip by yet, but Indiana got close last week. Down 35-7 early in the second half, the Hoosiers fought back, leaving the Buckeyes (4-0, CFP No. 4) and their exploited secondary happy to get out of nearly empty Ohio Stadium with a 42-35 win.

The previous week, the Buckeyes got a surprising late battle from Rutgers. Up 35-3 at halftime, they let the Scarlet Knights outscore them 24-14 in the second half. Ohio State won 49-27, but it was an unsettling day for coach Ryan Day and his defense.

“I don’t think there’s been anything schematically where you look at it and be like, ‘Well, that’s not good,’” Day said. “I mean, again we’re up 35-7 (in the Indiana game) with a defense designed to avoid big plays, and we had too many big plays. So, I think schematically we’re right where we need to be. We just need to actually be better.”

Day won't be in Champaign for this one: Ohio State announced Friday that Day had tested positive for COVID-19 and won't travel for the game. Defensive line coach Larry Johnson will act as interim coach. The team pushed back its Friday night flight to Saturday morning for the midday game.

Illinois (2-3) isn’t as talented as Indiana but has won two straight, and Ohio State will try not to let its guard down on the road Saturday.

Illinois dominated Nebraska last week in a 41-23 win, the first time the Illini won in Lincoln since 1924. Brandon Peters threw for more than 200 yards and Mike Epstein and Chase Brown each ran for more than 100 in a game in which Illinois got Peters and other key players back from bouts with COVID-19.

“The Nebraska game was the first time that we got a chance to see our entire group together, and we’re still missing a couple players," Illinois coach Lovie Smith said. “And again, everybody’s missing someone this time of the year, but it was the closest that we’ve had the entire football team together. And that is more along the lines of what we thought we would look like when we had everyone together.”

The Buckeyes have won eight consecutive games in the series and haven’t lost to Illinois since 2007.

“We’re getting ready to play — most would say, a lot of people would say — the best football team right now in college football," Smith said. “We understand who we’re playing.”

Ohio State running back Master Teague III had his best game of the season against Indiana, rushing for a career-high 169 yards and two touchdowns. Trey Sermon added 60 more on the ground, and Fields ran for 78 yards and a touchdown. Teague is averaging 95 yards per game.

Peters, a transfer from Michigan, was the starting QB for the opener, but then he tested positive for COVID-19 and was sidelined for the next three games. Illinois started three different quarterbacks in those games, including freshman Isaiah Williams, who had 296 yards of total offense in the 23-20 win over Rutgers on Nov. 14. It was the first time Illinois started four different quarterbacks in consecutive games since starters' records began being kept in 1975.

Despite Fields throwing his first three interceptions of the season, the Ohio State offense was typically prolific against Indiana. The Buckeyes piled up 607 yards, with Fields throwing for 300, Teague contributing 169, and Garrett Wilson catching seven passes for 169 yards and two TDs. It was the first time in Ohio State history that a QB passed for 300-plus yards, a back ran for 100-plus and a receiver eclipsed 150 yards in the same game.

The Illini's defense — as well as the team getting players back off the COVID list — has been a big part of their recent surge. The unit is fifth in the Big Ten in tackles, third in tackles-for-loss, first in forced fumbles and second in fumble recoveries. The defense picked off three passes and recovered two fumbles in the win over Nebraska. The Illini had three or more interceptions in back-to-back games for the first time in at least 20 years.