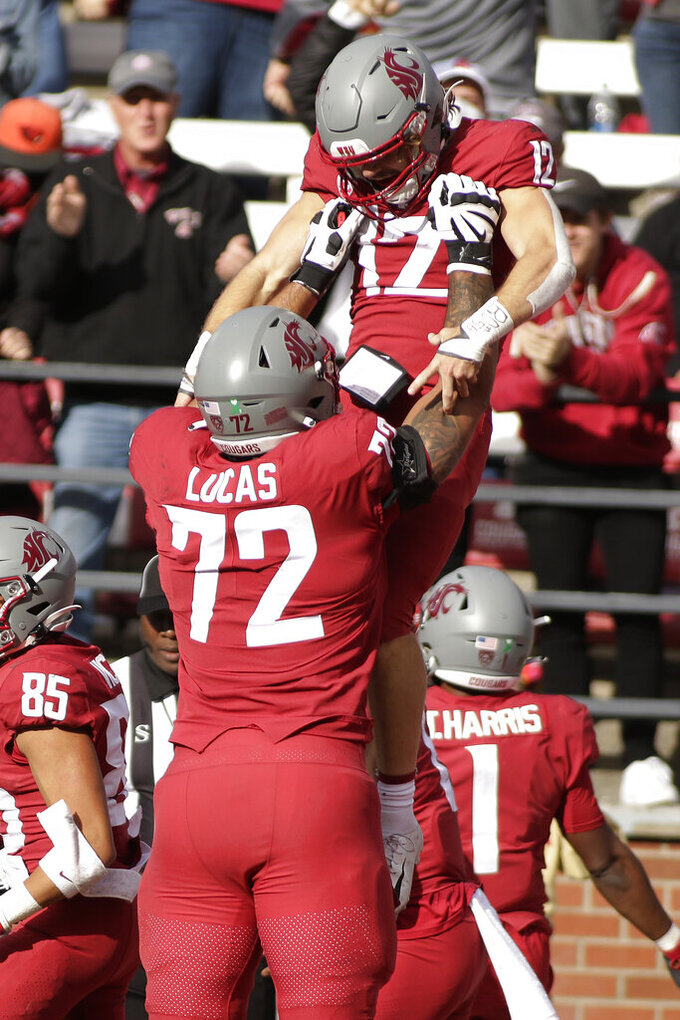 PULLMAN, Wash. (AP) — It took a little longer than expected, but Washington State seems to be rolling.

The Cougars' defense is proving to be stout as evidenced by their performance the past two weeks. And with Jayden de Laura at quarterback, the Cougars have found some potency on offense.

Yet, that all seems to be secondary heading into Saturday’s matchup against Stanford with questions hanging over the program about the status of coach Nick Rolovich after this weekend.

The state of Washington has set a deadline of next Monday for all public employees — including the Cougars coach — to be vaccinated against the coronavirus. Rolovich has applied for a religious exemption and his future with the team hangs on the answer.

Saturday could be just another afternoon on the Palouse with the Cougars facing a Pac-12 opponent. Or it could end up being Rolovich’s last game in charge for an indeterminant amount of time.

Rolovich said this week that he’s not been given a time frame for a decision on his request.

No matter Rolovich’s situation, the Cougars have suddenly found a spark after a lethargic start to the season.

The Cougars (3-3, 2-2 Pac-12) produced 491 yards of offense in beating Oregon State, which came in leading the Pac-12 North. It was a big change for a team that had struggled to score against FBS opponents all season.

De Laura had the best game of his career, completing 32 of 46 passes for 399 yards and three touchdowns. He was 15 of 18 passing in the decisive second half, when the Cougars scored on four consecutive possessions to take the lead.

“What you see is a quarterback who’s confident in his shoes,” Rolovich said. “He’s making people around him better. … I think he’s in the moment. He has let negative things roll off his shoulders better, and that’s all part of growing.”

“There’s something about the connection with the quarterback I think is important,” Rolovich said.

Stanford (3-3, 2-2) presents a much more dangerous passing attack than the Beavers could mount. Sophomore quarterback Tanner McKee has thrown for 1,449 yards and 12 touchdowns. He has thrown just three interceptions, all in a loss at No. 18 Arizona State last week. The Cardinal were limited to just 13 yards rushing in the 28-10 loss.

Stanford coach David Shaw said his team will focus on throwing the ball.

“I’ve got a quarterback that throws for 350-plus,” Shaw said. “Statistically that’s just the way it’s going to be.”

These teams were scheduled to play last Nov. 21 but the game was canceled because of coronavirus-related absences at Washington State. The Cardinal lead the all-time series 40-29-1, but Washington State has won the past four meetings.

Stanford has played four ranked opponents already and is 2-2 in those games. Stanford is one of just three teams in the FBS scheduled to play six opponents ranked in the preseason AP Top 25. Washington State has yet to play a ranked team.

The Cougars have five receivers with over 100 yards this season and a sixth just five yards shy of 100. On Monday, Rolovich called the Cougars' receivers the most improved position group. Last weekend, the Cougars connected on 11 passing plays that went for over 15 yards. “It was nice to see some yards after the catch and explosion,” Rolovich said.

Washington State defensive back George Hicks III was named the Pac-12 defensive player of the week for his performance against Oregon State. Hicks led the team with 10 tackles and got his first interception of the season in the Cougars’ win. The interception came late in the first half and ended an Oregon State drive to keep Washington State close. Hicks had seven tackles in the second half, including the final tackle of the game as Oregon State came up one yard short of a first down inside the red zone in the final minute.