Running back Zach Charbonnet emerging as leader for UCLA 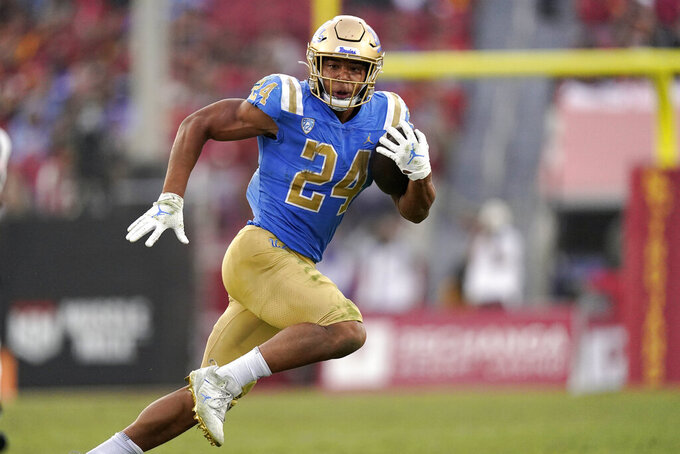 UCLA running back Zach Charbonnet runs the ball during the second half of an NCAA college football game against Southern California Saturday, Nov. 20, 2021, in Los Angeles. UCLA won 62-33. If the Bruins are going to contend for the Pac-12 title, it will need big seasons again from quarterback Dorian Thompson-Robinson and running back Zach Charbonnet. UCLA opens the season on Sept. 4 against Bowling Green. (AP Photo/Mark J. Terrill, File)

LOS ANGELES (AP) — UCLA's Zach Charbonnet quietly emerged as one of the top running backs in the Pac-12 last season after transferring from Michigan.

With the Bruins expected to possibly contend in the conference this year, the junior is looking to establish himself as one of the team leaders.

“That was one of my main points coming into this offseason was working on my leadership skills and just working on my vocal skills too,” Charbonnet said. “I have to take on that role, especially this year and trying to lead those running backs.”

Last season, Charbonnet led the Pac-12 with seven 100-yard rushing games and was second in average rushing yards per game (94.75). But it wasn't until the offseason and spring practices that the junior began to emerge more as a team leader.

“For us to be a player-led team, it has to come from the leaders. Everybody respects him and he understood that and just ran with it,” Foster said.

UCLA coach Chip Kelly said he has seen Charbonnet excel in all facets of his game. Charbonnet's quick impact in Westwood was a big reason the Bruins finished 8-4 last season and earned a bowl berth for the first time since 2017.

“A lot of the kids joke around and call him a cyborg but he just goes every day, he practices every day, he doesn’t miss a rep,” Kelly said. "Anything that we ask our guys to do, he’s there full speed and more. I think all the great ones are like that. They always just want to get a little bit better on a daily basis and Zach really kind of epitomizes that for us.”

Charbonnet's biggest improvements coming into the season have centered around pass protection and catching the ball out of the backfield. With the departures of Kyle Philips and Greg Dulcich for the NFL, Charbonnet is UCLA's leading returning receiver with 24 receptions.

Even though Charbonnet had at least 28 touches in the final two games of last season and six games with at least 21 carries, Foster said a reasonable workload would be around 25 touches per game.

“I think you can tell stuff is slowing down for him. He has all the tools, it’s just finetuning it,” Foster said. “It’s just little things outside of running, like catching, pass pro. It’s all stuff he can do but just improving, so it’s just the overall game.”

Charbonnet is up to 223 pounds, but his body fat is under 5%. As one of the leading returning running backs in a Power Five program, he is trying to block out the distractions that come with increased visibility.

“I don’t think about all that other stuff, all the preseason stuff, I don’t pay it too much time,” he said. “I just try to come in every day and do what I can and play to the best of my ability."

With Charbonnet established as the lead running back, there is still competition for the remaining carries. Deshun Murrell, Keegan Jones, Tomarion Harden and Kazmeir Allen remain in the mix.

The Bruins have excelled with two backs in Kelly's four years at UCLA. Kelly lauded Jones for his progress during the first two weeks of preseason camp while Allen could see time at running back and wide receiver.

“It’s a two-back system, two-back league, everybody has two backs, you’ve just got to be able to stay healthy and you don’t know what’s going to happen at the end of the year,” Foster said. “I want to get everybody developed as much as I can.”