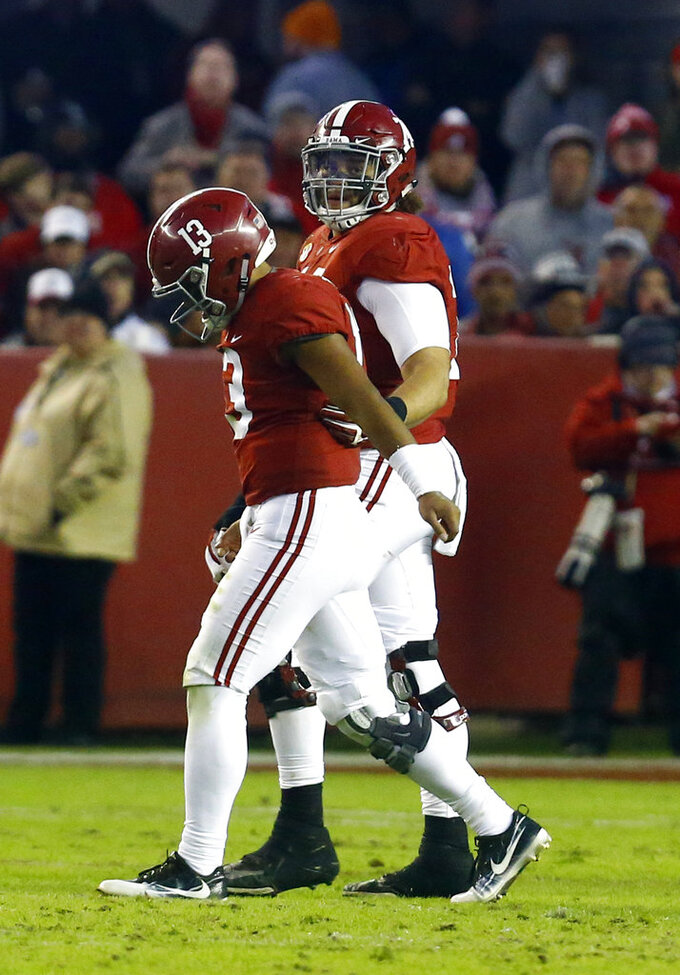 Alabama quarterback Tua Tagovailoa (13) is helped off the field by offensive lineman Jedrick Wills Jr. (74) during the second half of an NCAA college football game against Mississippi State, Saturday, Nov. 10, 2018, in Tuscaloosa, Ala. (AP Photo/Butch Dill) 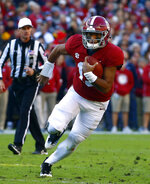 TUSCALOOSA, Ala. (AP) — Alabama coach Nick Saban says he has no plans to hold out quarterback Tua Tagovailoa this week against The Citadel.

Tagovailoa has been bothered by a right knee injury in recent weeks and left the Mississippi State game after getting hit on it. The top-ranked Crimson Tide hosts huge underdog The Citadel on Saturday, and Saban said Tagovailoa is "OK" and will practice.

Saban was asked Monday if he would consider sitting Tagovailoa for the game to allow him to rest the knee.

"No. Why would we do that?" Saban said. "I mean, to say this was not an important game or he doesn't need to play? I think we need to do a better job of the people playing around him, doing what they're supposed to do so he doesn't get hit. And he needs to do a better job of stepping up in the pocket and getting rid of the ball, which he had several opportunities to do.

"Some of these hits could be avoided by better execution, and I think that's what we're going to focus on, not trying to take a guy out of the game so he can't improve or do what he needs to do to get better."

Tagovailoa sat out the fourth quarter against No. 25 Mississippi State and was sacked four times in the game. Saban said afterward the quarterback could have returned if needed in the 24-0 win.

Backup Jalen Hurts hasn't played in the past two games after sustaining an ankle injury against Tennessee, leaving Mac Jones to get more playing time and chances in practice.

"Jalen's day to day. He's definitely getting better," Saban said. "Tua's OK. He's going to be able to practice, so that's not an issue. Mac is getting a lot of (repetitions), so I think he's getting better.

"Whatever the guys can do, we're going to have them do and get as many reps for them as we can."