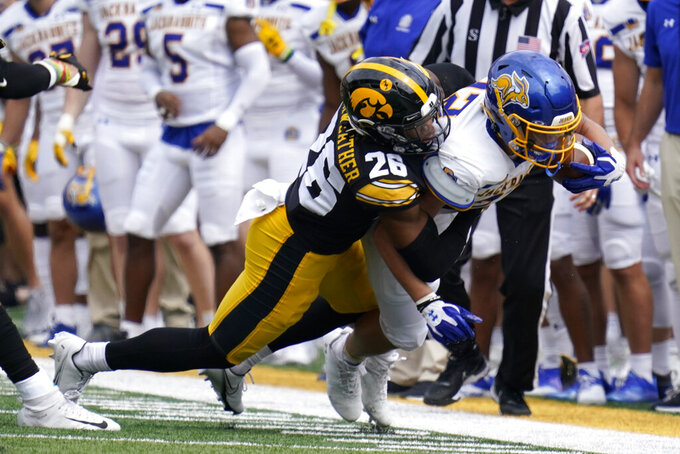 IOWA CITY, Iowa (AP) — Iowa's defense came up with two second-half safeties, and the Hawkeyes opened the season with a 7-3 win over South Dakota State on Saturday.

Neither team could do much offensively. Iowa finished with 166 yards of offense, while South Dakota State had 120. The two teams combined for more punts (21) than first downs (16).

“Obviously a very unusual scoring line,” Iowa coach Kirk Ferentz said. “You've got 3 (in the first quarter), 2 (in the third quarter), 2 in the fourth. I've never been around a game like that. But we'll take it today.”

Iowa ranked seventh nationally with four defensive touchdowns last season, so the Hawkeyes are used to getting points from that side of the ball. And they needed them on a day when the offense struggled.

“The standard's been set,” said linebacker Jack Campbell, who recorded one of the safeties and finished with 12 tackles.

The first safety came after Iowa's Tory Taylor had his punt downed at the South Dakota State 1-yard line in the third quarter. One play later, Campbell grabbed running back Isaiah Davis after he took the handoff and brought him down one yard short of getting out of the end zone.

The second safety came in the fourth, when Iowa's Joe Evans sacked quarterback Mark Gronowski in the end zone on a second-and-11 play.

“We're trying to score as much as we can on the defensive side, however we can do it” said Iowa safety Quinn Schulte.

The Hawkeyes kept South Dakota State pinned in its own territory for most of the game. Ten of Taylor's punts were downed inside the Jackrabbits' 20-yard line, including one at the 2 and the one at the 1.

“Tory did a great job,” Ferentz said. “I don't think if I've ever seen a punter so involved in a game either.”

“Field position was really tough for us,” South Dakota State coach John Stiegelmeier said. “It’s tough to go out there and mentally think we’ve got to go 98 yards against this defense.”

Iowa took a 3-0 lead in the first quarter on Aaron Blom's 46-yard field goal. The only points for South Dakota State came on Hunter Dustman's 44-yard field goal with 20 seconds left before halftime.

Iowa was without three offensive starters — wide receivers Keagan Johnson and Nico Ragaini, and running back Gavin Williams. All three missed time in preseason camp because of undisclosed injuries. Starting linebacker Jestin Jacobs left the game in the second quarter with an injury and did not return.

South Dakota State tight end Tucker Kraft, a second-team Associated Press FCS All-American last season, was injured after catching a pass in the first quarter and did not return.

Iowa had one of the worst offenses in the nation last year despite a 10-win season, finishing 99th in scoring offense and 121st in total offense. Petras' struggles led to plenty of boos from the sellout crowd at Kinnick Stadium, and with in-state rival Iowa State coming in next Saturday, there will be plenty of questions for Ferentz to answer. “I've still got a lot of confidence in him,” Ferentz said. “I think the noise on the outside is probably a lot louder than it is on the inside.”

South Dakota State, which fell to 2-10 all time against FBS teams, struggled to move the ball against Iowa's defense, which was one of the best in the nation last season.