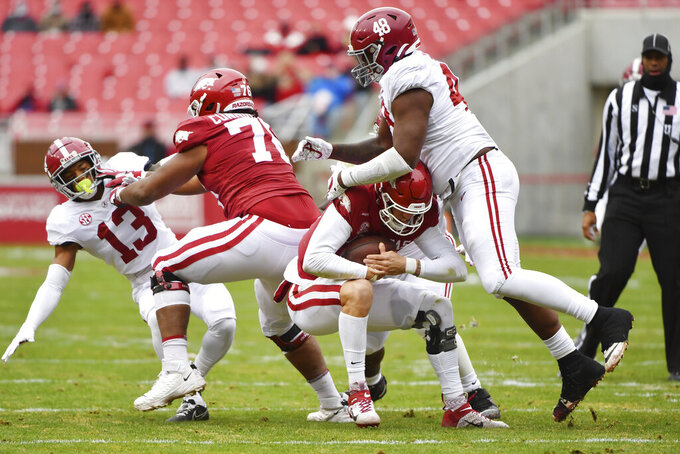 FAYETTEVILLE, Ark. (AP) — Alabama has been the dominant program in college football for more than a decade and Arkansas coach Sam Pittman has been coaching in the Southeastern Conference almost all of it.

After the top-ranked Crimson Tide buried Pittman's Razorbacks 52-3 on Saturday, the veteran coach said he believes the Crimson Tide has never been better.

“On tape, it’s the best Alabama team I’ve seen,” said Pittman, a longtime assistant at Tennessee, Arkansas and Georgia in his first season has head coach. “(Alabama coach Nick Saban) is going to hate me for saying that. I think he calls that rat poison. But that’s how I believe. That’s the best squad I’ve seen. They’re hard to stop.”

DeVonta Smith returned a punt 84 yards for a touchdown as Alabama scored 28 points in a span of 11 minutes in the first half .

After the teams traded field goals, Smith started the Crimson Tide (10-0, CFP No. 1) barrage. Najee Harris scored consecutive touchdowns just 14e seconds apart and a final plunge from 1 yard by Brian Robinson Jr. had Alabama in cruising toward the Southeastern Conference championship game next week against No. 6 Florida.

"One of the motivating factors was win 10 SEC games in a regular season which has never been done before,” Saban said. “And obviously we wanted to play to a standard. We got started a little slow and as the game went on, we got better and better on defense and controlled the tempo on offense. All in all, I was really pleased. We got to play a lot of players.”

It was an otherwise quiet day for Smith, with three catches for 22 yards, but the receiver bolstered his surging case for Heisman Trophy consideration on one play.

“We gave up 76 yards early in the game, then we went for a good little stretch where they didn’t get a first down and we started getting momentum on offense. The punt return was big,” Saban said.

Crimson Tide defenders racked up eight sacks, the fifth of which resulted in a fumble by Arkansas quarterback Feliepe Franks which was recovered by DJ Dale at the Razorbacks 4. Harris scored on the next play.

Alabama allowed 188 yards and kept Arkansas (3-7) from registering a first down during a streak of seven straight possessions from the first quarter to the third.

Harris and Robinson finished with a combined 100 yards rushing and five touchdowns on 27 carries. Jase McLellan added a final rushing down, an 80-yarder, with 1:51 left. Mac Jones, whose day was finished in the third quarter, threw for 208 yards on 24 of 29 passing for Alabama.

Franks was one of three Arkansas quarterbacks to take snaps, including back-up K.J. Jefferson, who left in the third quarter with an apparent leg injury, bringing Franks back into the game to finish. They combined to go 9 of 17 for 108 yards.

Alabama: The Tide went unbeaten in the SEC regular season for the third time in five years.

Arkansas: An encouraging first regular season under coach Sam Pittman ended with a four-game losing streak. Still, the Razorbacks’ three SEC wins were just one fewer than they had the previous four seasons combined.

Alabama’s win was its 14th straight over Arkansas. It’s Arkansas’ longest losing streak against a single opponent in school history. The 49-point margin of victory is the largest in the series since winning back-to-back games over the Razorbacks, 52-0, in 2012 and 2013.

Alabama leading tackler Christian Harris left the game after the first play when he came up with a lame shoulder after a tackle. Saban said he was unsure the extent of the injury and that the linebacker was scheduled for an MRI.

The Crimson Tide entered Saturday as a unanimous No. 1 and will most likely stay that way.

Arkansas could still make a bowl game in this strange season.

Alabama: Another trip to Atlanta for the SEC title game, the Tide's third in five years.