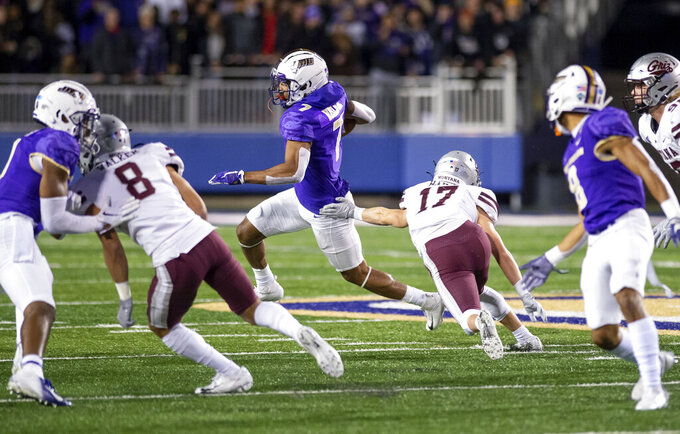 James Madison wide receiver Antwane Wells Jr. (7) looks for an opening in the Montana defense during the first half of an NCAA FCS football playoff game in Harrisonburg, Va., Friday, Dec. 10, 2021. (Daniel Lin/Daily News-Record via AP)

South Dakota State is one victory away from doing something no team in the history of college football has ever done: play for the national championship twice in a span of just over eight months.

The Jackrabbits lost in the FCS title game in the spring after the coronavirus pandemic pushed the 2020 Football Championship Subdivision season back — South Dakota State fell to Sam Houston on May 16.

The Jacks (11-3) can earn another shot at the title Saturday when they seek their third straight road victory at eighth-seeded Montana State (11-2). North Dakota State hosts James Madison in the other semifinal Friday night.

For South Dakota State, it's a step toward taking care of some unfinished business.

The Jackrabbits came within seconds of winning it all n the spring. They rallied from a 17-7 deficit and led Sam Houston until the Bearkats scored on a 10-yard pass with 16 seconds left for a 23-21 victory and the championship.

Isaiah Davis, whose 85-yard touchdown run had put the Jackrabbits ahead, said Thursday the team tried not to spend too much time looking back, but the coaches did give them T-shirts this summer bearing a simple reminder: 23-21.

“It just reminds us of that score and how close we were,” Davis said. “We know we can get back there. It really was a motivation during the summer, every day. We were hurting and during fall camp we were just thinking back to that 23-21 and that's what pushed us through.”

South Dakota State coach John Stiegelmeier said the losses during this season gave his team a sense they had to prove themselves all over, which they've done by reaching the semifinals for the fourth time in the past five seasons.

“When we lost, they felt like they didn’t live up to how good they can be, so I think that’s a motivating factor,” Stiegelmeier said.

The Jacks average 441 yards on offense, evenly divided between the run and pass, but meeting those averages against the Bobcats will be a tall task. Montana State allows just 13.15 points and 285.2 yards per game.

“To me, our guys are embracing a chance to get back to Frisco and that’s exciting for them because they got a taste of that in spring,” the coach said.

Charleston, South Carolina, was the site when Montana State made its only appearance in the game, defeating Louisiana Tech in 1984. The Bobcats will be trying to make a return trip under first-year coach Brent Vigen.

Montana State advanced by ending Sam Houston's 22-game winning streak, 42-19. The Bobcats also are the only remaining team that did not play in the spring, something Vigen is not so sure counts as an advantage.

“They had a couple more games under their belt this fall," Vigen said of South Dakota State. “You know, they were obviously right on the doorstep of a championship last year, but they’ve been really close for a long, long time."

In Fargo, North Dakota, third-seeded James Madison will try win a playoff game in the Fargodome for the second time; no other school has ever won a postseason game in Fargo. The Dukes beat North Dakota State 27-17 in 2016 en route to the championship.

That's JMU's only victory in five meetings with the Bison, who had won eight of the last nine national championships before the spring season.

This is also the Dukes' last go-round in the playoffs because they are moving to the Sun Belt Conference next season, and quarterback Cole Johnson believes it's fitting that JMU faced Montana in the quarterfinals and now take on the Bison.

“It’s really great to kind of go against all the big names and all the traditional big schools and powerhouse in FCS” during this last playoff run, he said.

Johnson, a “super senior” in his sixth season of college football, threw three touchdown passes in this spring's 38-35 semifinal loss to Sam Houston. His lone interception, however, led to the Bearkats' last points in their victory.

“We had that heart-breaking loss in the spring. We were up 21 points at halftime and that's kind of been our motivation all summer,” Johnson said.

He has put up impressive numbers this season, throwing for 39 TDs with just two interceptions.

The Bison have a unique situation with graduation set for the afternoon and the game hours later, and coach Matt Entz said several players will do both.

It's a common occurrence for the Bison, and their first two playoffs games suggest they will be ready. They've won those games by 65-10, giving Entz confidence they'll also have an answer for the Dukes' 40-points-per-game offense.

“I think I think our defenses played well the majority of the year. Been very consistent. The things that we stress -- tackling, turnovers, third down, stopping the run -- are the things that I think we hang our hat on,” he said.

The Bison are 30-1 in their playoff history on their home field.

By John Coon 27 minutes ago
By Joe Reedy And Ralph D. Russo an hour ago
By Cliff Brunt 20 hrs ago
By Dave Skretta 23 hrs ago
By The Associated Press 24 hrs ago