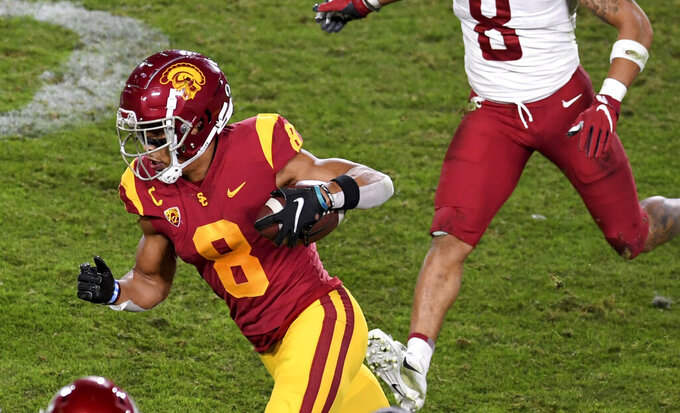 Amon-Ra St. Brown went into Southern California's game against Washington State with no touchdowns in 385 days.

It took less than 15 minutes Sunday for him to score four and take the Pac-12 lead in touchdown receptions.

St. Brown caught passes of 7, 22, 4 and 2 yards from Kedon Slovis to get a 38-13 win started. The junior from Anaheim, California, tied the Football Bowl Subdivision record for touchdowns in a quarter and joined Duke’s Corey Thomas in 1997 as the only players in FBS history with four touchdown catches in a quarter.

St. Brown finished with seven catches for 63 yards and is the Pac-12's third-leading receiver with 83 yards per game.

Slovis also threw a scoring pass to Tyler Vaughns to join Mark Sanchez, Matt Barkley and Cody Kessler as the only USC quarterbacks to throw for five TDs in a half.

Nebraska and Purdue combined for 233 yards in penalties in the Cornhuskers' 37-27 win. The Huskers were whistled nine times for 107 yards and the Boilermakers 11 times for 126.

Colorado's Jarek Broussard ran 25 times for 301 yards in a 24-13 win over Arizona, the most for the Buffaloes since Chris Brown went for 309 yards on the same number of carries against Kansas in 2002.

His 155 yards on eight carries in the second quarter set the CU record for rushing yards in a quarter, breaking the mark of 131 by Eric Bieniemy in 1988. His 184 rushing yards in the first half was the most since Charlie Davis went for 206 against Oklahoma State in 1971.

Navy's 19-6 loss to Tulsa was another illustration of the Midshipmen's offensive free fall.

Navy totaled just 153 yards and 2.4 yards per play, their lowest per-snap average since getting 2.1 per play against Connecticut in 2000.

The Tulsa defense's per-play average hadn't been so low since it held North Texas to 2.1 yards per play in 2006.

For the second time this season, and third time in 14 games, LSU allowed an opponent more than 600 yards.

No. 1 Alabama piled up 650 in a 55-17 win, a performance that turned up the heat on Bo Pelini, who is in the first year of his second stint as LSU defensive coordinator. The Tigers gave up 632 in the season-opening loss to Mississippi State.

Mississippi amassed 614 yards against Dave Aranda's 2019 defense, but the Tigers had a Joe Burrow-led offense that piled up more than 700 yards in a 58-37 win.