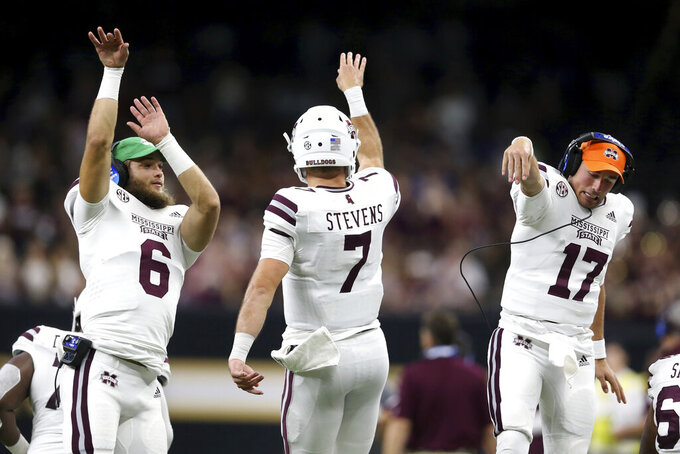 NEW ORLEANS (AP) — Tommy Stevens had to wait a long time for his first start as a college quarterback.

But the wait was worth it.

Stevens passed for two touchdowns and ran for one as Mississippi State defeated Louisiana-Lafayette 38-28 on Saturday in the Mercedes-Benz Superdome.

The former Penn State backup who learned from Bulldogs' second-year coach Joe Moorhead when Moorhead was the Nittany Lions' offensive coordinator, completed 20 of 30 passes for 236 yards. He had passes of 31 yards to Osirus Mitchell on the game's first possession and 12 yard to Austin Williams early in the fourth quarter to complete a 21-0 run.

"I texted Tommy last night," Moorhead said. "I told him this is the opportunity you've worked your whole life for. Go out, play loose and have fun.

"I thought it was a good positive step for the rest of the season."

Kylin Hill rushed 27 times for 197 yards and a touchdown and Stevens had a 4-yard touchdown run that broke a 14-all tie with 31 seconds left in the first half.

"I think he's one of the premier backs in the conference and the country," Moorhead said. "He showed that today."

The Bulldogs finished with 261 yards rushing and 236 yards passing.

"We did what we wanted to do offensively," Moorhead said. "We showed balance with the run and the pass."

Levi Lewis ran for one touchdown and passed for another for the Ragin' Cajuns. He threw an 11-yard touchdown pass to Nick Ralston in the second quarter and ran 1 yard for a touchdown with 9:56 left in the game.

"Anybody who looked at us last season and looked at this game would see there's no doubt we've made significant improvement," Cajuns second-year coach Billy Napier said. "We kept getting up off the matt. We were tough - physically tough and mentally tough.

"The area that gave us trouble is we were sloppy at times. The old adage that the first rule is don't beat yourself applied. But we had a good SEC West opponent on the ropes."

Mississippi State: An adequate though sloppy start for a team that won eight games and went to a bowl game last season.

Mississippi State announced before the game that seven players, including thee starters, were suspended for the opener "due to a violation of team rules."

The starters were DT Lee Autry, LB Willie Gay Jr. and K Jace Christmann. Jordan Lawless, who was listed as a co-starter with Christmann, missed a 27-yard field goal in the second quarter but kicked a 37-yarder with 1:02 left in the game.

ULL hurt itself significantly by losing three fumbles and throwing two interceptions. It finished minus-3 in turnovers as MSU lost two fumbles.

Mississippi State: The Bulldogs play their home opener against Southern Mississippi on Saturday.

Louisiana-Lafayette: The Cajuns play a true home game when they host Liberty on Saturday.