Struggling East Carolina is next up for No. 7 Cincinnati 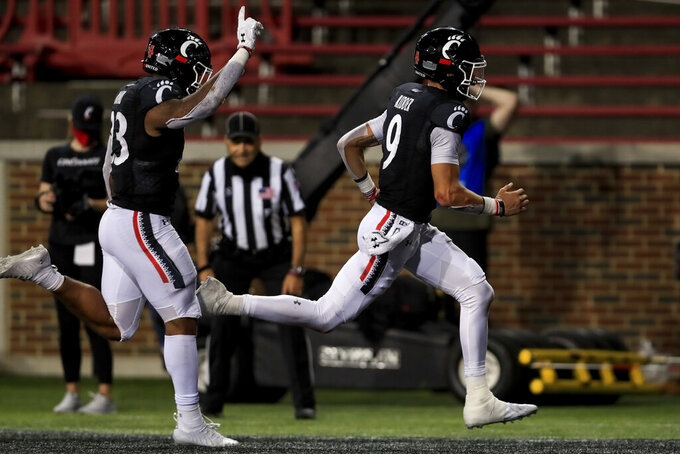 Cincinnati is looking to extend its school-record 19-game home winning streak while also keeping hopes alive of crashing the College Football Playoff. The Bearcats’ defense has added motivation after East Carolina amassed 638 yards of total offense in a 46-43 loss to Cincinnati last year. Cincinnati has allowed 13 or fewer points to five of its six opponents this season.

Cincinnati QB Desmond Ridder vs. ECU's defense. East Carolina coach Mike Houston talked this week about the challenge of slowing down the multi-faceted Ridder, who has accounted for 13 touchdowns in the past three games, including eight rushing. In last year’s meeting, Ridder rushed for 121 yards and passed for another 161.

East Carolina: In last season’s loss to the Bearcats, then-freshman receiver C.J. Johnson had 12 catches for 283 yards and a touchdown. Johnson again is the big-play threat for the Pirates with a team-leading four receiving TDs while averaging 22 yards per catch.

Cincinnati: Tight end Josh Whyle has become a favorite target for Ridder in the red zone. He is the Bearcats’ second-leading receiver with 18 catches for 178 yards and four TDs.

The series started in 1986 and continued annually until 2004. Following a 10-year hiatus, the squads have faced off every year since 2014. While the Bearcats trail in the all-time series, they have won eight of the past nine meetings. ... Cincinnati running back Gerrid Doaks had a career-high 184 rushing yards in last week’s win over Houston. It was the Bearcats’ sixth-best single-game total over the last 20 years. ... Coach Houston announced this week that freshman defensive tackle Traveon Freshwater was switching to tight end. ... Bearcats four-time all-AAC punter James Smith became the school’s leader in punting yardage last week. He has punted 218 times for 9,515 yards with only four touchbacks.