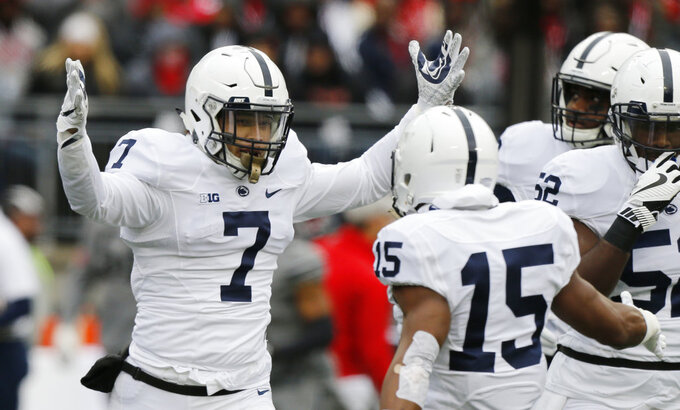 FILE - In this Oct. 28, 2017, file photo, Penn State linebacker Koa Farmer (7) celebrates recovering a fumble against Ohio State during the first half of an NCAA college football game in Columbus, Ohio. Farmer has always been a big fan of TV crime dramas. After he is done playing football, Farmer wants in on the action, for real. The senior is a criminology and sociology major at Penn State. (AP Photo/Jay LaPrete, File)

Koa Farmer's taste in television steers in a very clear direction.
"I liked 'Law and Order.' I liked 'CSI.' I liked 'Bones.' 'Criminal Minds' was a good one," the Penn State linebacker said. "And continuing to college following, 'How to Get Away with Murder,' 'Breaking Bad.' I'm just really into that kind of stuff. Into the competitive field of getting criminals. The whole critical thinking part of how agents handle certain situations or conflicts."
After he is done playing football, Farmer wants in on the action — for real. The senior is a criminology and sociology major at Penn State. In the summer of 2016, a former professor hooked him up with law enforcement organizations in Washington to get a taste of what it's like to solve crimes.
"I shadowed DEA agents, ATF agents," Farmer said. "I shadowed the forensics unit. I shadowed MPD."
Farmer's former professor is Jenifer Smith, a retired FBI special agent who currently is the Director of the Department of Forensic Sciences in Washington. During the summer, Farmer would drive from State College, Pennsylvania, once a week and stay at Penn State quarterback Trace McSorley's home in Northern Virginia.
This was no desk job. He was riding along with real agents and officers who were being called in to solve, or at times stop, real crimes.
"With the forensics unit, I had to take an oath. I had to sign something that if I got killed my parents wouldn't sue the government," Farmer said. "I had to put a bullet proof vest on, and I basically was patrolling the city waiting for radio calls of crime activity."
He gathered evidence from an armed robbery while working a crime scene with forensics. With the Bureau of Alcohol, Tobacco, Firearms and Explosives, he went to a training facility where firefighters learn how to determine the cause of fires.
The most fun was riding along with D.C. Metro Police Department, Farmer said.
Farmer was placed with four sergeants working narcotics, riding in an unmarked car.
"Next thing I know they say, 'Move in! Move in!'" Farmer said. "All of sudden I don't have my seat belt on. I'm in the back. They just peeled out. He's driving throughout D.C., like in the middle of D.C., it's crowded. They were going through D.C., like, going 100 miles per hour. Going on the sidewalk.
"Next thing you know they got out the car, they start running. He said, 'Go get him.' So I was running down the middle of the street in D.C. chasing after this dude. We stop him.
"That happened at least eight times that whole day," Farmer said. "That was a hell of day."
Farmer's teammates loved to hear his stories. As for Penn State defensive coordinator and linebackers coach Brent Pry?
"He was, like, 'Ahhh, you shouldn't be doing that," Farmer said. "We need you to play football."
This summer, Farmer was scheduled to work with Penn State's Red Cell Analytics, using research software that can detect patterns in terrorist attacks, but a lack of funding for the project cancelled the class.
Farmer is expected to be one of the leaders of Penn State's inexperienced defense this year, and at 6-foot-1 and 236 pounds with good speed, he should draw interest from NFL teams. After starting his career at Penn State at safety, he is now settled in at linebacker.
"He's going to test extremely well," Penn State coach James Franklin said. "But I think he's got a chance to have a real strong year this year and kind of have a coming-out-party type of deal."
Playing defense is sort of like solving crimes, said Farmer, who was primarily an offensive player at Notre Dame High School in Southern California. It takes critical thinking and spotting clues.
"That's why I love playing defense now," Farmer said. "Because it's so challenging to me. I'm thinking when I'm on the field."
___
Follow Ralph D. Russo at www.Twitter.com/ralphDrussoAP and listen at https://www.podcastone.com/AP-Top-25-College-Football-Podcast
___
More AP college football: https://apnews.com/tag/Collegefootball and https://twitter.com/AP_Top25