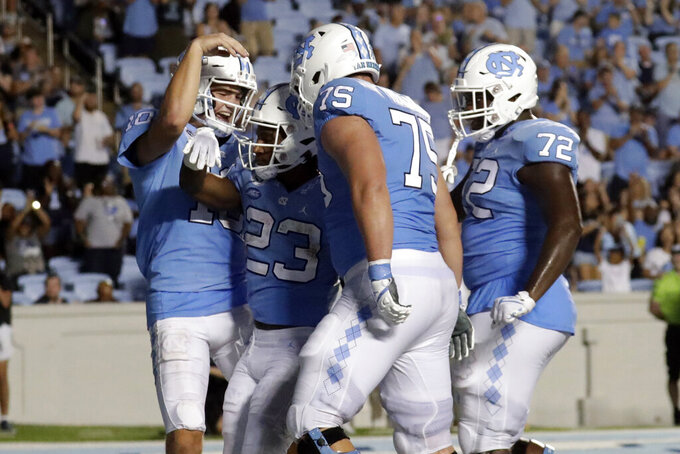 Line: North Carolina by 1/2 point, according to FanDuel Sportsbook.

In-state bragging rights. Appalachian State defeated North Carolina in 2019 in Chapel Hill, a loss that didn't sit well with Tar Heels fans given the Mountaineers have always been viewed as the little brother. But Appalachian State has repeatedly found itself in the Top 25 since moving up to the FBS and has made its mark in the Sun Belt Conference with four titles. This game has been sold out since July with more than 30,000 fans expected at Kidd Brewer Stadium in Boone, North Carolina. Both schools have high aspirations and received votes in the AP preseason Top 25. A victory here would be a huge momentum boost for the winner.

UNC: WR Josh Downs. The third-year receiver is a threat to take it to the end zone any time he touches the ball. He had nine catches for 78 yards and two scores in last weekend’s Week Zero opener. He ranked 10th in the Bowl Subdivision with 1,335 yards receiving.

Appalachian State RBs Nate Noel and Camerun Peoples. Both backs have had 1,000-yard seasons with Noel doing it last year and Peoples in 2020. The Mountaineers should be strong up front with four of five starters returning on the offensive line.

UNC coach Mack Brown was Appalachian State’s head coach in 1983 -- he was 32 years old at the time -- before working as Barry Switzer’s offensive coordinator at Oklahoma in 1984. ... Tar Heels quarterback Drake Maye became the first player in program history to throw five touchdown passes in a first start. ... This is the first of two straight road games against Sun Belt Conference opponents for UNC. The Tar Heels travel to Georgia State next week. ... Appalachian State's last five games vs. Power Five schools have been decided by less than seven points. ... Appalachian State, Alabama, Clemson and Oklahoma are the only FBS programs with nine-plus wins every year since 2015. .. The Mountaineers lost seven defensive starters from last year's team.