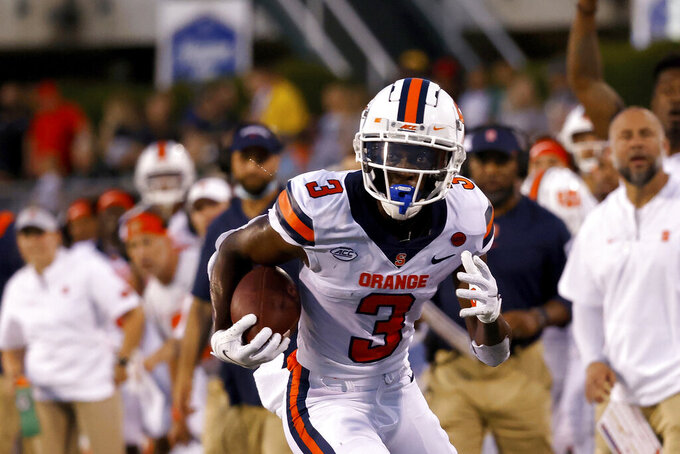 In a post on Twitter, the redshirt junior wrote that he was grateful to the university and all the teammates he played with. Coach Dino Babers was not mentioned.

“It's with a heavy heart that I am announcing that I will be entering the transfer portal,” DeVito wrote.

DeVito, a highly regarded recruit from Don Bosco Prep in New Jersey, succeeded Eric Dungey as the starter in 2019 and kept the job for two seasons, though he missed the final seven games of 2020 with a leg injury. He started the first three games of this season but was replaced by Mississippi State transfer Garrett Shrader and has not played in the past four games.

With the 6-foot-4, 230-pound Shrader at the helm, Syracuse (3-4) beat Liberty on a last-second field goal but has lost all three of its Atlantic Coast Conference games. Two were decided on the final play, one in overtime, and on Saturday the Orange fell to Clemson, 17-14, when kicker Andre Szmyt missed a 48-yard field goal in the final minute of regulation.

DeVito accepted the backup role initially, hoping for another shot, but Shrader has elevated the offense with his running ability and Babers opted to keep him as the starter.

A pure pocket passer who picked Syracuse because of Babers’ uptempo offense, DeVito finishes his Syracuse career 337 of 572 for 3,866 yards and 28 touchdowns passing with 12 interceptions.

His departure leaves the Orange with inexperienced candidates for the backup role. JaCobian Morgan played in four games with two starts as a freshman last season after DeVito was injured, Dillon Markiewicz has thrown one pass, and Justin Lamson enrolled in February and has no statistics.