Syracuse on a roll in third season under coach Dino Babers 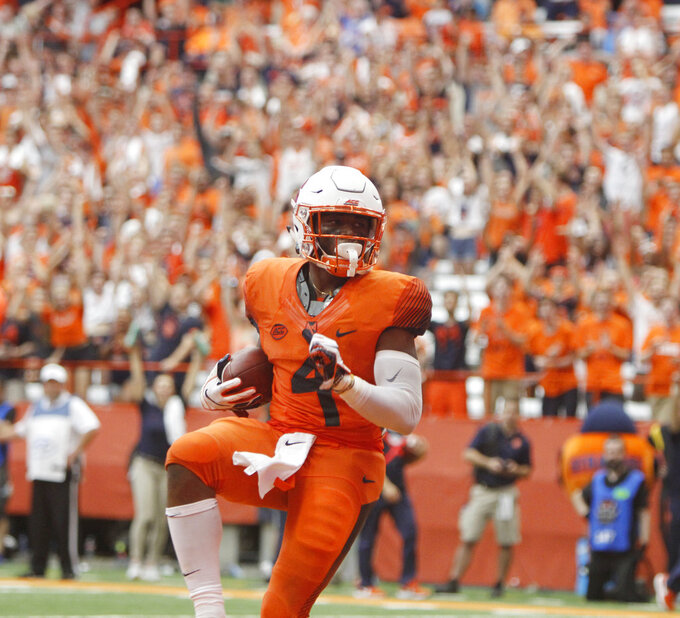 SYRACUSE, N.Y. (AP) — When the clock ticked to zero on Saturday and Syracuse had beaten another marquee team at home, Orange coach Dino Babers didn't have to flinch.

"I didn't get hit with any ice or water," said Babers, in his third season at Syracuse. "That means that they expected to win. A lot of guys thought that we could do that, thought we had a chance. It was good to see them follow through."

In retrospect, Babers probably would have enjoyed an icy bath — the temperature in the Carrier Dome was stifling, hovering near 90 degrees after the Orange had soundly defeated Florida State 30-7 with backup quarterback Tommy DeVito at the helm in the decisive second half.

Syracuse (3-0, 1-0 Atlantic Coast Conference) now sits in an uncustomary spot in the conference — tied for first (with Boston College) in the Atlantic Division — after snapping its five-game ACC losing streak. It's just the Orange's eighth 3-0 start since 1942.

Critics of the Seminoles complained that they were throttled by one of the worst defenses in the nation — Syracuse entered the game ranked 108th, but the figures were skewed by one forgettable quarter in a season-opening victory at Western Michigan. The Orange's secondary was caught off-guard during a 28-point third-quarter surge by the Broncos, getting torched for 336 yards. WMU had plays of 21, 31, 37, 59, 64 and 84 yards before quarterback Eric Dungey rescued the Orange in the fourth in a 55-42 triumph.

This week, Syracuse stands 78th in total defense and ranks second nationally, behind No. 21 Miami, in third-down conversion defense. The Orange have allowed eight conversions in 42 tries on third down after limiting the Seminoles to 1 of 14. FSU had seven three-and-outs and faced six third downs of 10 yards or more.

"This performance shows a lot of growth from the team we were two years ago and the team we were last year," Coleman said. "It means everything going forward because this is going to be big for establishing who we are this season."

The victory for the Orange, who have beaten both Clemson and Virginia Tech at home since Babers took over, earned Syracuse a couple of votes in this week's AP Top 25 poll. It also snapped a 10-game losing streak against FSU dating back more than half a century, and Babers made a point of emphasizing that in another raucous postgame celebration.

Babers said Monday there were no concerns about Dungey, who sat out the second half against FSU after getting poked in the eye and suffering blurred vision that has since cleared up. Dungey also appeared to have an issue with his right (throwing) arm early in the game, something that first surfaced in the season opener. Babers downplayed that, calling it an "owie," and Dungey is listed as the starter on the depth chart for Saturday at home against UConn (1-2).

Syracuse's veteran offensive line has performed well, too, giving the running game a boost. The Orange are averaging 257 yards rushing per game and 4.8 yards per carry behind the duo of Moe Neal and Dontae Strickland. Against the Seminoles, freshman Jarveon Howard got a chance late in the third quarter and delivered a 45-yard run that set up a touchdown.

The 5-foot-10, 210-pound Howard, who did not play in the season opener, has rushed for 124 yards on 18 carries, an average of 6.9 yards, and likely will see more action as the season progresses.

"Jarveon obviously showed that he needs to have some more carries to see if he can continue to do what he's done, or is it just luck?" Babers said. "The first two guys ... have proven that they can do it. If somebody gets hot, we've got to go with the hot-hand guy."