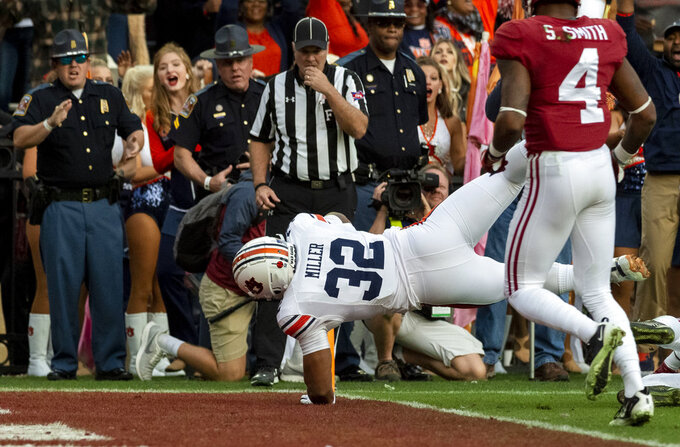 Auburn running back Malik Miller (32) runs a pass reception from Auburn wide receiver Ryan Davis (23) in for a touchdown during the first half of an NCAA college football game, Saturday, Nov. 24, 2018, in Tuscaloosa, Ala. (AP Photo/Vasha Hunt) 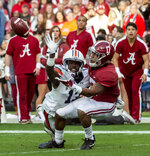 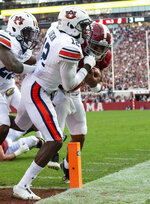 TUSCALOOSA, Ala. (AP) — Tua Tagovailoa came out of halftime firing touchdown strikes down the field, and the result was another runaway Alabama victory.

Tagovailoa threw five touchdown passes, ran for a score and could scarcely miss in the second half to lead the top-ranked Crimson Tide to a 52-21 victory over rival Auburn on Saturday.

"We executed on all cylinders on offense coming into that opening drive in the second half, so it's really good," he said.

With Alabama leading Auburn (7-5, 3-5) just 17-14 at halftime, Tagovailoa launched the Tide into another SEC blowout. He was 11-of-12 passing for 208 yards and four touchdowns in the second half, despite only finishing off one series in the fourth quarter.

"I thought Tua was into it," Alabama coach Nick Saban said. "His leadership was really important for our offense. Don't ask me why but it doesn't seem like we had the right kind of energy in the first half."

The second-half numbers included touchdowns of 46 yards to Jerry Jeudy, 33 to Josh Jacobs, 40 to DeVonta Smith and 22 to Henry Ruggs III on an acrobatic, leaping grab.

The game was close until Tagovailoa threw a pair of long TD passes in a three-minute span of the third quarter. The first hit Jeudy down the left sideline and the second went to Jacobs, who shook off a few defenders on his way to the end zone.

Auburn had used creative calls to keep it within three at halftime.

Wide receiver Anthony Schwartz ran for a 9-yard touchdown and fellow receiver Ryan Davis took a lateral and launched a 23-yard touchdown pass to Malik Miller. That came with 4 minutes left before the half after freshman Smoke Monday blocked a punt.

"At halftime, our goal was to get to the fourth quarter," Auburn coach Gus Malzahn said. "The game got away from us, and that's very disappointing."

The Tigers also had Shaun Shivers' 75-yard touchdown run called back thanks to a holding penalty. Malzahn drew an unsportsmanlike conduct penalty for his protest of the call, saying it was because he said "bull crap."

"He got a touchdown called back, that's what got me upset," Malzahn said. "It was a big play in the game, no doubt about that. I mean, obviously, you look back at the final score, seven points doesn't make a whole lot of difference. But at the time it made a big difference."

Auburn was stopped short on a fake field goal in the third quarter when backup quarterback Malik Willis threw it to kicker Anders Carlson. The potential three points briefly loomed larger after Jarrett Stidham's 52-yard touchdown pass to Darius Slayton made it 31-21.

It was a runaway from there.

Auburn: Kept it close into the second half in a game where few gave the Tigers much chance. Stidham was 13-of-30 passing for 127 yards with a touchdown and an interception, including some drops, and faced heavy pressure.

Alabama: Struggled in the first half and dominated the second, just like against The Citadel. Avenged last season's 26-14 loss that shut the Tide out of the SEC championship game.

"I think the SEC is a very good league," Saban said. "For the team to go undefeated is quite an accomplishment but it doesn't really mean anything if we don't take advantage of the opportunity we have next week in the SEC championship game."

Alabama's seniors tied the 2017 Tide class with an NCAA-record 53rd win. The last group left with five losses while the current seniors are 53-3 with perhaps three games remaining.

Alabama backup defensive back Jared Mayden will miss the first half of the SEC championship game after getting flagged for targeting in the third quarter. Auburn's Davis was injured on the play but eventually rose and walked toward the locker room.

"He took a pretty good shot to the head," Malzahn said. "They expect him to make a full recovery."

Alabama faces No. 5 Georgia for the SEC title in a rematch of the national title game.