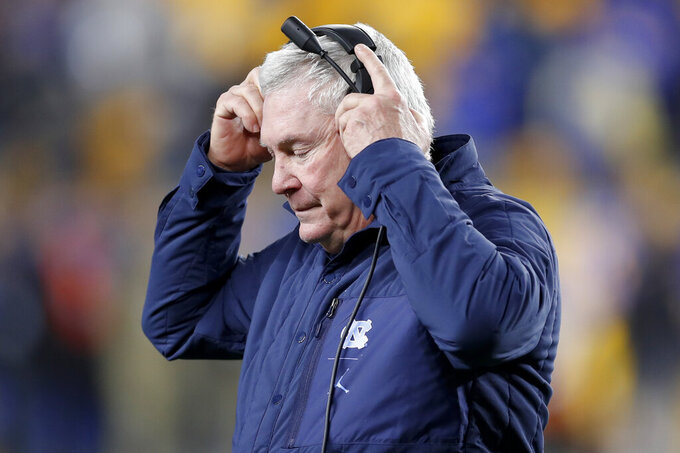 North Carolina coach Mack Brown adjusts his headset as he walks the sideline during the second half of the team's NCAA college football game against Pittsburgh, Thursday, Nov. 14, 2019, in Pittsburgh. Pittsburgh won 34-27 in overtime. (AP Photo/Keith Srakocic)

CHAPEL HILL, N.C. (AP) — North Carolina is down to its last two chances to earn a bowl game in Mack Brown’s return.

The Tar Heels host Mercer on Saturday in their final home game. They must win that one and the regular-season finale at rival North Carolina State to reach six wins for bowl eligibility in a season that has seen just about every game go down to the final minute.

“This team needs to get to a bowl,” said Brown, who is wrapping up the first year of a second stint with the Tar Heels. “They’re playing hard.”

Brown inherited a program that had won five games over the previous two seasons, including just two in the Atlantic Coast Conference. The Tar Heels (4-6) have seen nine of their 10 games this year decided by seven or fewer points, including a 21-20 loss to reigning national champion Clemson.

Those results have simultaneously provided optimism about the program’s direction while also highlighting how small its margin for error is each week. That’s why Brown is pointing to the importance of having a bowl invitation to show for this first year of a rebuilding effort.

“We’re learning how to win,” Brown said. “And I think that’s why we’re so close and we’ve had those opportunities.

The Bears (4-7) are wrapping up their schedule with the trip to Chapel Hill for only their second meeting with an ACC school since the school revived its football program in 2013. Mercer, a Championship Subdivision team from the Southern Conference, started 2-0 but has suffered five of its seven losses since by double-digit margins.

“The season hasn’t gone the way we wanted it to,” Mercer coach Bobby Lamb said, adding: “We’ve got a lot young people that have played and we’re looking forward to next year, but we’ve got one more to try to go get.”

Some other things to know about Saturday’s Mercer-North Carolina matchup:

UNC true freshman quarterback Sam Howell is closing in on a program record.

Howell ranks sixth in the Bowl Subdivision ranks with 29 touchdown passes. That puts him one shy of tying the UNC single-season record set by Mitch Trubisky — who went on to be the No. 2 overall pick in the NFL draft — in 2016.

The Tar Heels are 2-3 at home, beating Miami and Duke in dramatic finishes while losing to Appalachian State, Clemson and Virginia. The combined margin of those games? Seventeen points.

Running back Tyray Devezin has a chance to become the second Mercer player to reach 1,000 yards rushing since 2013.

The junior needs 51 yards to hit that milestone. That comes after he ran for 168 yards and four touchdowns in last weekend’s loss at East Tennessee State. He also ran for 130 yards and four more scores on Nov. 2 against Samford.

“When he looks like he’s going down, he’s back up and running again,” Lamb said.

The Tar Heels and Bears met in 1925, with UNC winning 3-0. Their second meeting comes nearly a century later after Mercer’s program was disbanded after 1941 for more than seven decades.