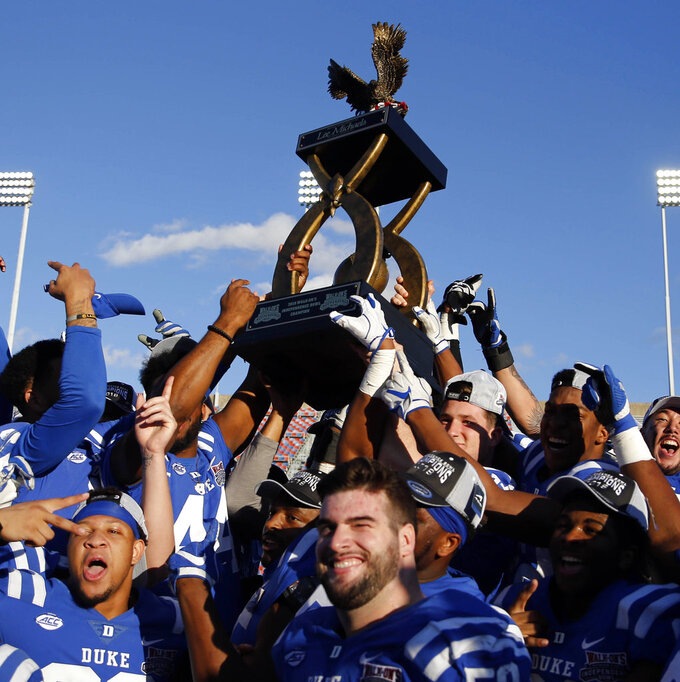 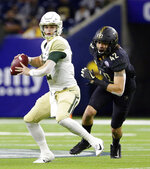 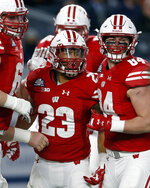 NEW YORK (AP) — Jonathan Taylor ran for 205 yards and a touchdown and topped the 2,000-yard season mark to help Wisconsin rout Miami 35-3 in a chilly Pinstripe Bowl on Thursday night.

Taylor, just a sophomore, ripped off runs of 39 and 41 yards and was sensational at Yankee Stadium and combined with a defense that forced five turnovers to help a Wisconsin (8-5) team ranked fourth in the first AP Top 25 poll salvage its fifth straight bowl victory.

Last season. Taylor ran for 130 yards in Wisconsin's 34-24 win over Miama in the Orange Bowl.

The Badgers, certainly used to the cold, came out swinging for the fences — they scored two touchdowns just 3 1/2 minutes into the game and seemingly knocked the will out of Miami (7-6).

Jack Coan made the most of his start for injured Alex Hornibrook (concussion) and hit Kendric Taylor for a 35-yard TD on the first drive. Rosier's first pass of the game was intercepted and Taylor capitalized with a 7-yard score to make it 14-0.

Coan is a Long Island native and needed nearly 50 tickets for friends and family. He scored on a 7-yard run in the fourth for a 28-3 lead.

HOUSTON (AP) — Charlie Brewer threw for 384 yards and two touchdowns, the second a tiebreaking 52-yarder in the fourth quarter, and ran for 109 yards and another score to help Baylor beat Vanderbilt in the Texas Bowl.

Brewer connected with Marques Jones for the 52-yard stroke that that made it 45-38 with less than two minutes left. The Bears then stopped Vanderbilt on fourth-and-5 to secure the victory.

Brewer's other touchdown pass was a 75-yarder earlier in the fourth quarter and he scored on a 1-yard run in the third quarter.

The Bears finished 7-6 a year after they managed just one in coach Matt Rhule's first season.

Vanderbilt (6-7) was led by Kyle Shurmur, who threw for 286 yards and a touchdown, and Ke'Shawn Vaughn, who ran for two touchdowns and set a Texas Bowl record with 243 yards rushing — which ranks second in school history. Shurmur moved past Jay Cutler (8,697) for most career yards passing in school history with 8,865.

Duke (8-5) snapped a two-game losing streak, scoring touchdowns on seven straight drives. The Blue Devils flipped a 27-14 deficit in the second quarter to a 56-27 lead by midway through the fourth.

Jones set Independence Bowl records with the five touchdown passes and 423 yards passing, and Duke also had the most points in the event's history.

Coach David Cutcliffe won his fourth Independence Bowl. He led Ole Miss to victories in Shreveport in 1998, 1999 and 2002 and is already enshrined in the bowl's Hall of Honor.