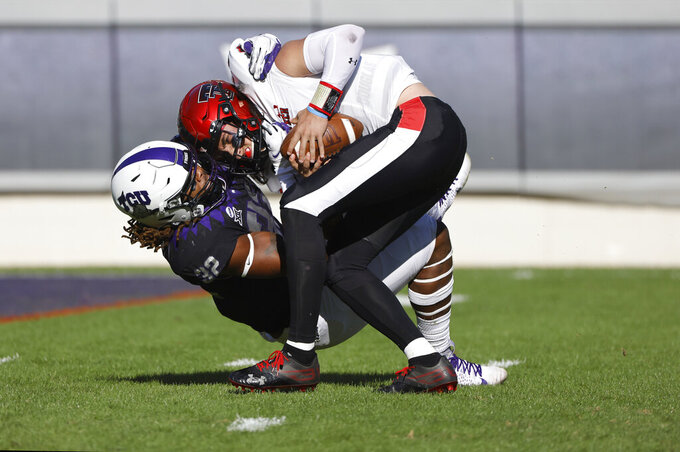 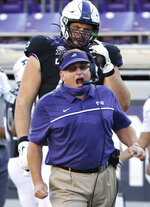 FORT WORTH, Texas (AP) — Max Duggan and TCU went to the ground when they weren't able to do much through the air against Texas Tech.

Duggan ran for 154 yards and three touchdowns, including a game-clinching 81-yarder late as the Horned Frogs snapped a five-game home losing streak with a 34-18 win Saturday.

“They were not going to let us throw the ball very well, and so we had to be able to run it. So we took what they gave us," TCU coach Gary Patterson said. "We did enough to win.”

Duggan, who finished 11-of-23 passing for 73 yards with an interception, had a 3-yard keeper for a score in the first half. He sprinted 48 yards for a touchdown in the final minute of the third quarter, then had the 81-yarder on his 19th and final carry with 1:42 left.

“When a quarterback outruns the secondary, you know you have a guy that’s very athletic,” Patterson said.

“I wasn’t throwing the ball great, and I need to be better on that,” Duggan said. “But, you know, the O-line receivers, everybody, stepped up being able to run the ball and being able to attack them that way.”

“Those long runs were back-breakers,” Tech coach Matt Wells said. “I thought we’d actually done a good job of kind of containing Max. Max is probably the fastest quarterback in the league.”

Texas Tech quarterback Henry Colombi was sacked five times while completing 23 of 41 passes for 234 yards with two long second-half touchdowns and two interceptions. Ja'Lynn Polk had a 60-yard catch-and-run when C.J. Ceasar II fell down, and the usual third-string sophomore cornerback in his first start for TCU was also beat on Erik Ezukanma's 57-yarder.

After the touchdown by Ezukamna with 11:47 left, the Red Raiders made a 2-point conversion to cut their deficit to 27-18, with the thought being they could then pull out a win with a touchdown and a field goal.

Tech got the ball back with just under five minutes left when Duggan was stopped for no gain on fourth-and-2 from the 18. The Red Raiders then drove to the TCU 19 before Trey Wolff was sent out on second down, but missed wide left on a 37-yard attempt with 2:44 to go.

“We know we needed to have time left and we had to stop them on the back end. So we got Trey down in the range where we wanted,” Wells said. “May have been down early, but it was what we wanted to do. We’ve got to kick a field goal either on the first or second possession.”

As Duggan took off running down the field, he said one thought went through his head — “Just don’t get caught."

Wolff's 40-yard field goal on the final play of the first half was Tech's first made field goal this season. He had been 0-for-3 before that. That came after Tech got a first down with 3 seconds and no timeouts left, and were able to get the field goal unit to make the kick.

After TCU’s opening drive started at the Tech 33, Duggan’s deep pass on the first play was intercepted in the end zone by Zech McPhearson. That ended Duggan’s streak of 127 consecutive passes without a pick. Duggan’s 3-yard TD put the Frogs up 10-0 with 10:32 left in the second quarter, when Texas Tech still had minus-6 yards total offense.

Texas Tech: The Red Raiders will have a losing record in Big 12 play for the 11th season in a row, since going 5-3 in 2009. To avoid their fifth losing season in row overall, they would have to win their last three regular-season games — and then win if they get in a bowl game.

TCU: After five sacks combined in their first four games, TCU's defense has five in each of their last two games. Ochaun Mathis had three of the sacks against Texas Tech, which went three-and-out on nine of its first 12 drives.

Texas Tech: At home to play Baylor next Saturday.