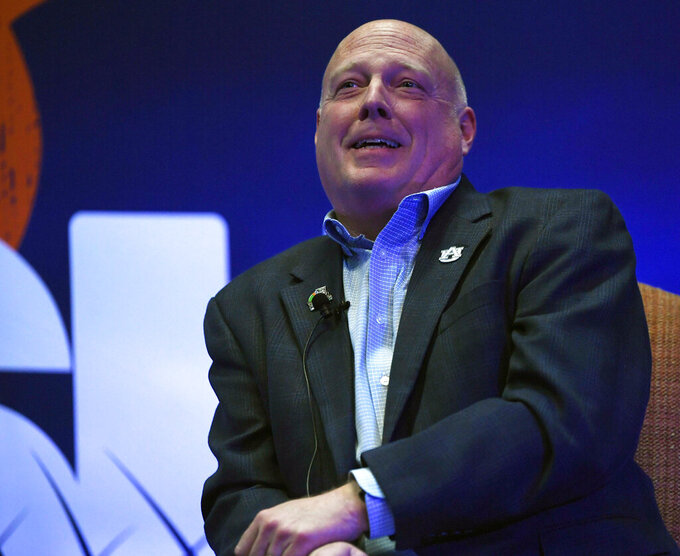 FILE - In this May 1, 2019 file photo Longtime Auburn University broadcaster Rod Bramblett speaks at an Auburn University alumni event in Dothan, Ala. The 16-year-old charged with manslaughter in the crash that killed Bramblett and his wife was driving more than 30 miles over the speed limit when his Jeep struck the rear of the couple's SUV, according to court records made public Tuesday, July 2, 2019. (Todd Van Emst/AU Athletics via AP)

AUBURN, Ala. (AP) — The 16-year-old charged with manslaughter in the crash that killed Auburn radio announcer Rod Bramblett and his wife was driving more than 30 miles over the speed limit when his Jeep struck the rear of the couple's SUV, according to court records made public Tuesday.

Bramblett was known as the voice of the Auburn Tigers' sports teams. The 53-year-old Bramblett and his 52-year-old wife, Paula, died as a result of injuries from the May 25 crash.

Auburn police announced charges Monday against 16-year-old Johnston Edward Taylor in connection with the crash, and new details of what led to the charges emerged from the court documents.

AL.com reports a toxicology report indicated "Taylor's blood sample contained THC, which is the primary psychoactive component of marijuana, and is indicative of recent usage of marijuana at the time of the collision."

The affidavit released Tuesday cites a report from the Alabama Law Enforcement Agency stating that Taylor's Jeep Laredo was accelerating from a speed of 89 mph to 91 mph in a 55-mph zone (143 kilometers to 146 kilometers in an 88 kph zone) when the crash occurred. There was no braking, according to the report.

Taylor told authorities he fell asleep at the wheel and did not remember what happened, according to the police report.

The teen was hospitalized with non-life-threatening injuries after the crash.

Taylor was charged as an adult and arrested at his Auburn home with a $50,000 bond. An official with the Lee County Jail said Monday evening he had been released. A court date for Taylor has not yet been set.

Bramblett had been Auburn's football and men's basketball announcer since 2003, and had called baseball games since 1993

This story has been corrected to fix the ages of Brambletts.