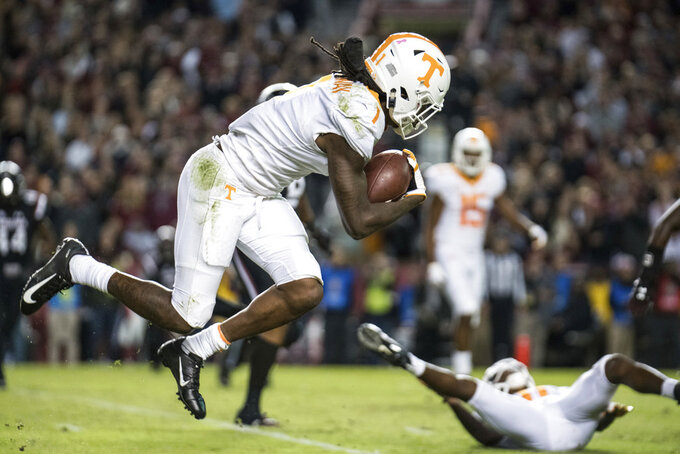 KNOXVILLE, Tenn. (AP) — Tennessee likes to consider itself a premier football program based on its history, which means it shouldn't be sitting out the postseason in back-to-back years.

Yet that's the possibility facing the Volunteers unless they close the season on a rush.

After squandering a 12-point lead Saturday in a 27-24 loss at South Carolina , Tennessee (3-5) must win three of its four remaining games to become bowl eligible in coach Jeremy Pruitt's debut year. Tennessee's trying to get back to the postseason after going 4-8 and setting a school record for losses last year .

"We don't have a lot of margin for error, and we've got to make sure we take advantage of that and do the best we can," defensive end Kyle Phillips said. "This program is a top-10 program. If we want this program to go to the next level, we've definitely got to do better."

Tennessee hosts Charlotte, No. 11 Kentucky and Missouri over the next three weeks before closing the regular season at Vanderbilt. While having three straight home games might seem like a benefit to Tennessee, the Vols actually have played better on the road lately.

Wherever the Vols are playing, they must cut down on the mistakes that caused them to let the South Carolina game slip away. Tennessee led 21-9 early in the third quarter before South Carolina outscored the Vols 18-3 the rest of the way.

Tennessee moved the ball well behind a makeshift line with left tackle Marcus Tatum making his first start of the season in place of Trey Smith, who is out indefinitely after being diagnosed with blood clots in his lungs last week. But the Vols committed nine penalties for 75 yards and gave up 224 yards rushing to a South Carolina team that had been struggling to run the ball.

"There's lots of lessons that we can learn," Pruitt said. "We've got to take them and move forward. ... We've got to be able to finish and find a way to win games like that."

Much of the postgame conversation among Tennessee fans centered on a third-quarter play in which no fumble was called even though television cameras showed South Carolina's Rico Dowdle losing possession at the Vols' 1-yard line. South Carolina scored a touchdown on the next play and tied the game at 24-all with a two-point conversion.

Pruitt said Monday it was "definitely a fumble" but refused to blame the loss on that play. He said the Vols' mistakes cost them the game.

Tennessee can't afford to dwell on what went wrong last week. The Vols have too much at stake as they prepare for Charlotte (4-4), a Conference USA program coming off a 20-17 victory over Southern Mississippi .

Although Tennessee is a 21-point favorite and has won 29 straight home games against teams from outside the Power Five, the Vols aren't taking anything for granted.

"Games like this, we can't fall back," Phillips said. "We can't slack off. We don't have much room for error to slack off, so we've got to make sure we prepare just like it's any other team we play."