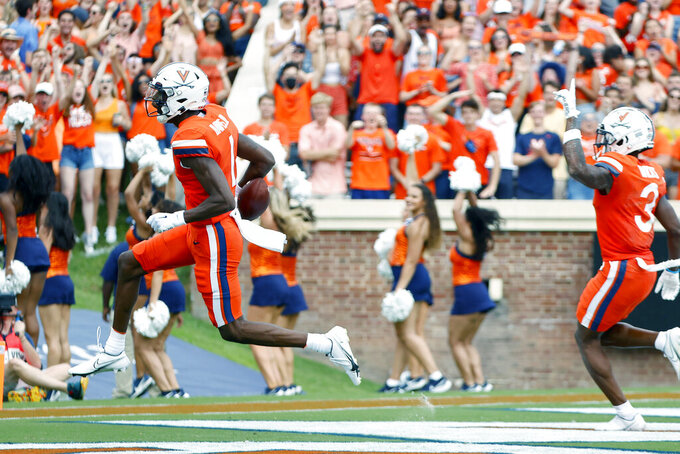 Virginia's wide receiver Lavel Davis Jr.(1), left, runs the ball for a touchdown with Dontayvion Wicks(3) against Richmond during the first half of the NCAA college football game at University of Virginia in Charlottesville, Va., on Saturday, Sept. 3, 2022. (Daniel Sangjib Min/Richmond Times-Dispatch via AP) 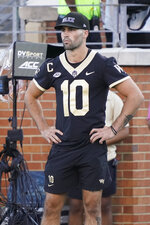 No. 24 Tennessee at No. 17 Pittsburgh. The game is dubbed the Johnny Majors Classic, honoring the man who coached both programs, and it's in a series that dates to 1980. The Vols have never beaten the Panthers in three prior meetings, including a 41-34 Panthers victory last year in Knoxville when Kenny Pickett threw for two scores and ran for a third and Pitt's defense was dominant.

No. 23 Wake Forest at Vanderbilt. The Demon Deacons (1-0) will welcome back quarterback Sam Hartman, who was sidelined for about a month with a non-football medical issue, as they take on the already 2-0 Commodores. Wake Forest beat VMI 44-10 in its opener behind redshirt freshman Mitch Griffis, while Vandy has averaged 52.5 points in wins against Hawaii and Elon. Vandy coach Clark Lea was the linebackers coach at Wake in the 2016 season.

North Carolina at Georgia State. The defense-challenged Tar Heels allowed 40 fourth quarter points in a 63-61 victory at Appalachian State, and don't figure to entertain another shootout against the Panthers. Georgia State outgained South Carolina in its opener, but lost 35-14 when the Gamecocks scored twice on special teams. UNC won 59-17 when the programs met last season.

Healthy again after missing all of last season with a torn ACL, Virginia wide receiver Lavel Davis Jr. made an immediate impact in the Cavaliers' 34-17 victory against Richmond. The 6-foot-7 Davis caught four passes for 89 yards, including a 56-yard touchdown. As a freshman in 2020, David led the ACC and was second nationally with an average of 25.75 yards per reception.