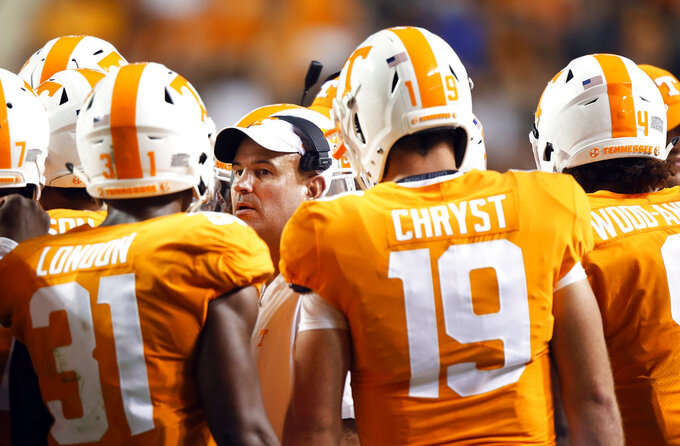 FILE- In this Sept. 22, 2018, file photo, Tennessee head coach Jeremy Pruitt, center, talks to his players in the second half of an NCAA college football game against Florida in Knoxville, Tenn. The Volunteers have lost 15 straight interdivisional games and haven’t beaten an SEC West team since 2010. Tennessee will try to end that skid when it faces SEC West opponents each of the next two weeks, including a Saturday visit to No. 21 Auburn. (AP Photo/Wade Payne, File)

The Volunteers have lost 15 straight games to the SEC West. Tennessee's last win against a Western Division opponent was a 52-14 trouncing of Mississippi in 2010.

"It's not something we talk about," linebacker Daniel Bituli said of Tennessee's problems against the West. "We just focus on the next game."

Lately, Tennessee hasn't done well against any SEC opponent, regardless of its division. The Vols have lost 11 straight SEC games and haven't beaten a conference foe since November 2016.

But the Vols were unable to win against the West even when they posted consecutive 9-4 and Top 25 finishes in 2015 and 2016.

The odds are against them again this time. Tennessee is a 15 ½-point underdog Saturday at Auburn. Alabama is outscoring opponents by 40 points per game.

Offensive tackle Drew Richmond considers the upcoming schedule a chance for the Vols to prove they're better than their results have shown thus far.

"I just feel it's a good opportunity," Richmond said. Auburn is "a very good team, but I feel like we're a good team too."

Each year, SEC teams play two regular-season games against teams from the opposite division. Since 2011, when Tennessee's losing streak versus SEC West teams started, East teams have gone 36-70 against the West during the regular season, 1-6 in league championship games and 0-1 in playoff games.

Tennessee has fared even worse in interdivisional games than other East teams in part because of the SEC's scheduling format. Every SEC team has one permanent opponent from the opposite division that it faces each year. Tennessee's permanent West opponent is Alabama, so the Vols are the only East team that must play the Crimson Tide every season.

During Tennessee's 15-game losing streak to the West, only once has Tennessee faced an unranked West team (a 24-20 home loss to Arkansas in 2015). Those 15 games include 12 meetings with top-10 teams and five losses to opponents ranked No. 1.

Tennessee has it typically brutal West matchups this year by facing Auburn and Alabama on back-to-back weeks. The Vols hope having a coach with an SEC West background could help out this time.

"I've coached against (Auburn) for a long time, so offensively there's some familiarity there for us and them," Pruitt said. "From a defensive standpoint, (Auburn defensive coordinator) Kevin Steele was very instrumental in me getting hired at Alabama. I worked with him and we're very good friends, so we kind of know each other and know the philosophies there. Obviously the next week, I worked for Coach Saban for eight years. I would think it would help."

The Vols want to show they're ready to compete again. Ending several years of frustration against the West would be a major step forward.