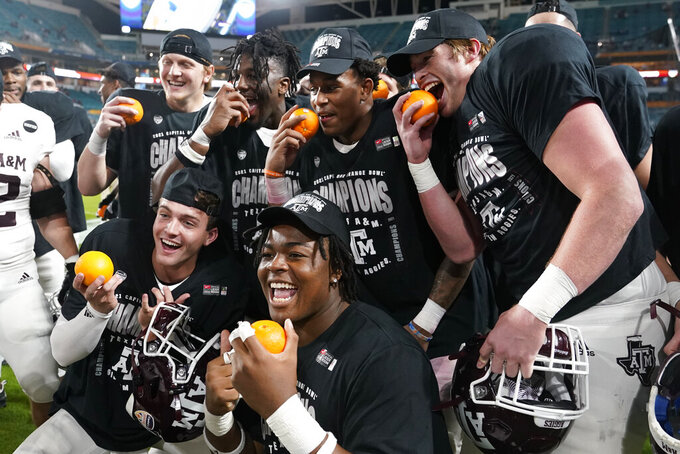 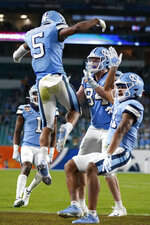 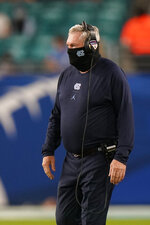 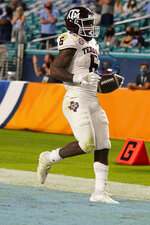 MIAMI GARDENS, Fla. (AP) — Texas A&M coach Jimbo Fisher pulled a hamstring as he tried to avoid the players who wanted to give him a celebratory Gatorade bath.

Luckily, Fisher didn’t have to run in the Orange Bowl.

Devon Achane did more than enough of that for the Aggies.

Achane had two touchdowns in the final 3:44, including a 76-yarder that put Texas A&M ahead to stay, and the fifth-ranked Aggies beat No. 14 North Carolina 41-27 on Saturday night — capping a winless bowl season for the Atlantic Coast Conference.

“North Carolina had one heck of a team, man,” Fisher said. “That was one of the great Orange Bowls. ... But I also say, there’s a heck of a football team standing in front of me.”

Kellen Mond passed for 232 yards and ran for a score for the Aggies (9-1), who were in the Orange Bowl for the first time since 1944 and were one spot away from making the College Football Playoff field. Fisher improved to 3-0 in Orange Bowls, winning two previous ones at Florida State.

Achane’s go-ahead score came on a play where he nearly tripped over one of his own blockers, broke a tackle and then got loose down the left sideline.

“Ain't nobody catching me," Achane said.

The Aggies got a fourth-down stop on the ensuing possession, and Achane — the game's MVP after a 140-yard effort, taking over for Isaiah Spiller after he got “a little banged-up," Fisher said — sealed the win on a 1-yard run with 1:34 left.

Fitting, in a season when young players scored the overwhelming majority of Texas A&M's touchdowns, a freshman had the final two scores.

“I just can’t wait for next season,” Achane said.

Sam Howell passed for 234 yards and three touchdowns, two of them to Josh Downs, for the Tar Heels (8-4). North Carolina was without leading rushers Javonte Williams and Michael Carter, leading receiver Dyami Brown and top tackler Chazz Surratt — all of whom opted out of the bowl game.

“We were so close," Howell said. “We played a heck of a game out there tonight and just came up short. We were right there."

The ACC sent two teams to the playoff but went 0-6 in bowls, four of those losses by two touchdowns or more.

Howell — a likely Heisman Trophy candidate in 2021 — did his best to change that stat. He tied the Tar Heels' career TD passing record of 68 with his three scoring throws, all of which gave North Carolina leads.

“We lost 4,000 yards coming into the game and still had a chance against the No. 5 team to win,” UNC coach Mack Brown said.

The first go-ahead throw from Howell saw Dazz Newsome make a diving 28-yard grab with 4:56 left in the half to put the Tar Heels ahead 13-10. The next was a 10-yarder to Downs with 8:01 left in the third for a 20-17 lead, a drive extended when Texas A&M had an interception in the end zone waved off by penalty. And the third was a 75-yarder to Downs early in the fourth, when Howell saw him break free, pointed to him and let the ball fly.

But every time UNC went up, Texas A&M answered.

The rest was up to Achane, and Fisher is already thinking about history repeating itself in 2021. It'll be his fourth season at Texas A&M; he won an Orange Bowl in his third season at Florida State and a national title in his fourth.

“I’m gonna tell you this: We ain’t done yet," Fisher said.

North Carolina: The Tar Heels gave up 24 points in the fourth quarter, after allowing just 17 points in the first 45 minutes. It was a difficult end for a defense that forced five three-and-outs.

At worst, Texas A&M should remain No. 5 and match its best AP poll finish since finishing No. 1 in 1939 (joining No. 5 rankings to end the 1956 and 2012 seasons). North Carolina still could finish ranked for only the fourth time in the last 27 seasons.

Of the 25 bowl games played so far, the ACC and Conference USA have had the losing team in 48% of them. Like the ACC, C-USA also went 0-6 this bowl season.