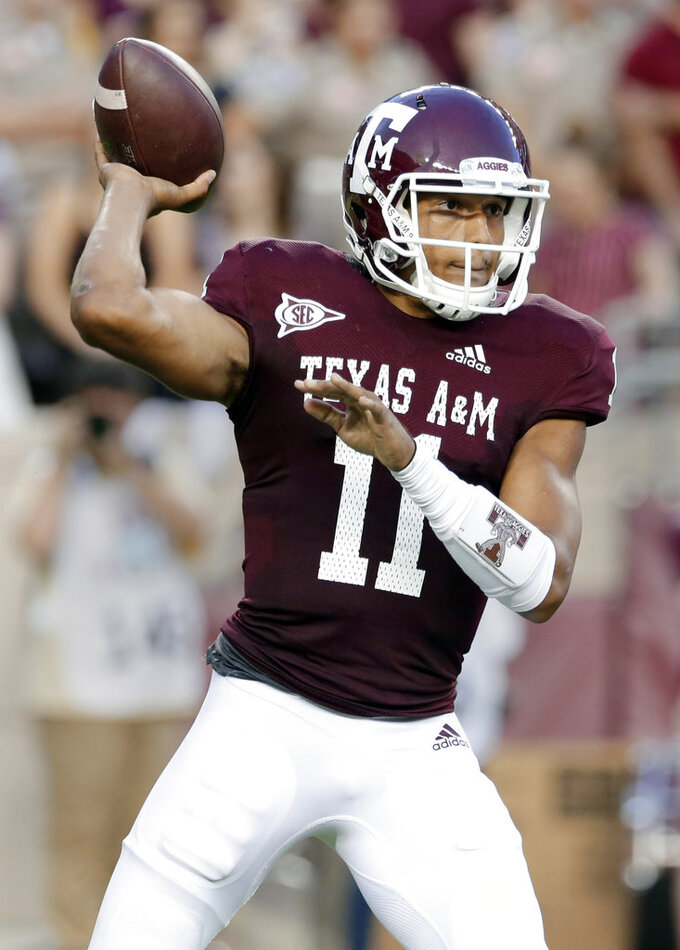 When the 22nd-ranked Aggies play at the Gamecocks on Saturday, the game could tell a lot about which one takes a step forward.

Mond and the Aggies (4-2, 2-1 Southeastern Conference) are trying to continue their rise in their debut season with coach Jimbo Fisher . Bentley, who missed last week's game with a left knee injury, hopes to return to action with a better performance than his last outing against No. 18 Kentucky two weeks ago.

Mond is third in SEC total offense and fourth in the league passing at 241 yards a game. Texas A&M is seeking its third straight league win, something it has not accomplished in two years.

"I'm definitely not satisfied with my play, but I like where I'm at right now," Mond said.

Bentley is averaging 232 yards passing per game, but has not looked strong in South Carolina's biggest games. He had just nine yards passing in the first half at Kentucky as the Gamecocks trailed 24-3. Bentley also had three interceptions in the game.

He was medically cleared to compete last week against Missouri, but it was backup Michael Scarnecchia who threw three touchdowns and rallied the Gamecocks to a dramatic 37-35 win over the Tigers on Parker White's 33-yard field goal with two seconds left.

"As long as I'm ready to go, that's the plan" to start, Bentley said. "And Mike's going to be ready to go."

More than a few Gamecocks fans have questioned if Scarnecchia shouldn't get the starting call this week as well. The senior, recruited to South Carolina by Steve Spurrier before the 2014 season, thinks Bentley is the guy.

"He's won games. He's helped go from three wins to nine wins," Scarnecchia said. "So I can't argue with coach's decision because of his success here."

Some other things to watch when No. 22 Texas A&M visits South Carolina in Saturday:

Texas A&M coach Jimbo Fisher and South Carolina's Will Muschamp are good friends accustomed to playing each other. The two were LSU coordinators — Fisher on offense, Muschamp on defense — for Nick Saban on the Tigers 2003 national championship team. They met each year as rivals for four seasons when Fisher coached at Florida State and Muschamp led Florida from 2011-14.

The Gamecocks have struggled again in running and stopping the run. They're 11th in the SEC in running the ball and next-to-last in the league in allowing 194 yards a game on the road. Texas A&M has averaged nearly 221 yards a game rushing while leading the SEC in rush defense with 78.8 yards allowed through six games.

Texas A&M has a 33-game streak of scoring at least 14 points a game, tops in the SEC and the third longest among schools in Power Five conferences. Only Oklahoma with 46 in a row and West Virginia with 37 straight such games are ahead of the Aggies.

South Carolina's defense has played its best after halftime, allowing just 12 points over its past seven quarters after halftime. The run dates to a loss to No. 2 Georgia when the Gamecocks held the Bulldogs off the board in the fourth following giving up three TDs in the third period. South Carolina held Vanderbilt and No. 18 Kentucky scoreless in those second halves. The Gamecocks shut out Missouri in a rain soaked third quarter last week before the Tigers ended the shutout streak with 12 points in the fourth quarter.

The winner of Texas A&M-South Carolina game receives the Bonham Trophy . The prize is named after South Carolina native James Bonham, who fought and died in the Battle of the Alamo in 1836. The Aggies have held the trophy all four years of the series, going 4-0 against the Gamecocks since joining the SEC.