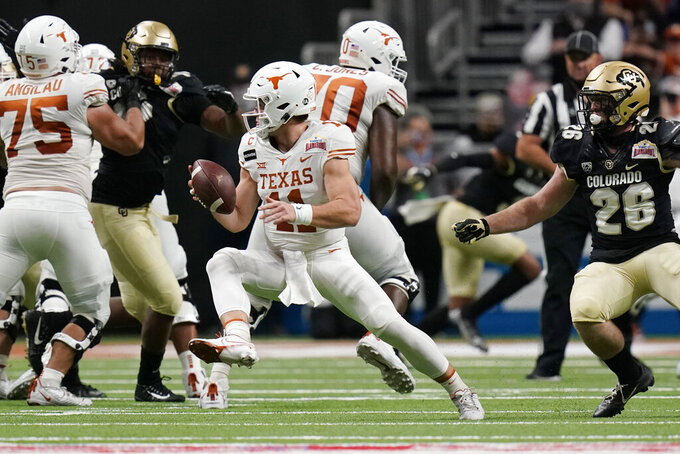 SAN ANTONIO (AP) — Texas senior quarterback Sam Ehlinger missed the second half of the Alamo Bowl after injuring his shoulder against Colorado on Tuesday night.

Ehlinger returned to the field in the third quarter with his arm in a sling. There was no word on the extent of Ehlinger’s injury.

Ehlinger played the entire first half, completing 10 of 16 passes for 160 yards and a touchdown. He completed a 14-yard pass to Bijan Robinson with 5:28 remaining in the first quarter to give the Longhorns a 14-0 lead.

Sophomore quarterback Casey Thompson started the second half and led Texas to a touchdown on its opening possession. Thompson completed a 13-yard touchdown pass to Joshua Moore just 37 seconds into the third for a 24-10 advantage.

The Longhorns are seeking to to remain undefeated in five bowl games under coach Tom Herman.