Tiny non-scholarship Drake gets crack at No. 24 Iowa State 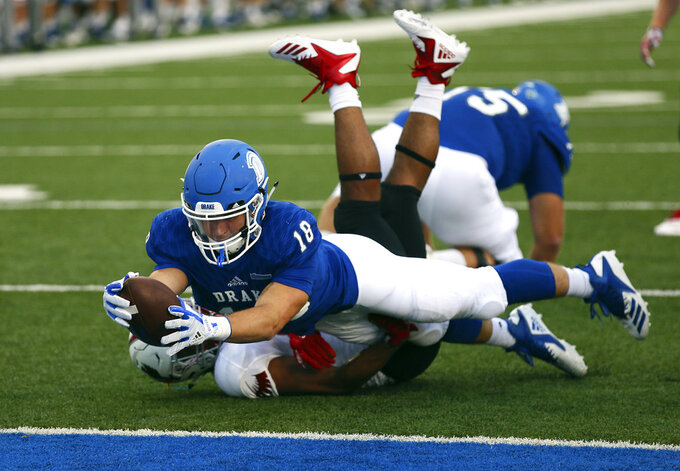 In this Sept. 1, 2018 photo provided by Drake Athletics, Drake running back Braeden Hartwig dives over the goal line during a college football game against William Jewell in Des Moines, Iowa. The Bulldogs were leading 7-0 with 7:18 remaining in the first quarter when lightning halted the game. Drake thought its season was over. But Iowa State needed one more opponent, offering the Bulldogs the opportunity of a lifetime. (Chris Donahue/Drake Athletics via AP)

DES MOINES, Iowa (AP) — When the Drake Bulldogs walked off the field in Morehead, Kentucky, on Nov. 17, their seniors were sure their football careers were over.

A random series of events that began in September and ended two days after that supposed finale has given the Bulldogs one more crack at playing the game they love — on by far the biggest stage they've ever seen.

Drake, with an undergraduate enrollment of 3,000 and an FCS football program that doesn't offer scholarships, got the chance of a lifetime when 24th-ranked Iowa State asked the Bulldogs to be the opponent in a makeup game on Saturday at Jack Trice Stadium. Drake, which played its home finale on Nov. 10 in front of 1,348 people, could see 60,000 in the stands in Ames.

"It's about as much of a dream come true as you could possibly imagine," Drake senior defensive lineman Nathan Clayberg said. "To have another week tacked onto the season, that's just so special."

Drake and Iowa State (7-4) have actually played each other 69 times, but the series ended in 1985 as the Bulldogs transitioned into the lower levels of the sport. In fact, Drake hasn't even played a game against an FBS school since beating South Florida 23-22 in 1997.

But fate — and some nasty thunderstorms — brought these old Missouri Valley conference rivals back together.

Iowa State played only five minutes of its opener against South Dakota State on Sept. 1 before lightning forced it to cancel the game. Drake, a 30-minute drive south of Ames, called off its opener that night for the same reason.

The Cyclones and Bulldogs had initially explored setting up a makeup game for this weekend back in September, but the NCAA denied a waiver that would have let Iowa State count a win over Drake toward its bowl eligibility. FBS programs aren't allowed to have one of their victories be against a team that doesn't give out scholarships count for bowl qualifying.

Instead, the Cyclones scheduled a game against Incarnate Word of the FCS for Dec. 1 — with the caveat being that that game would be called off if Incarnate Word made the playoffs or Iowa State made the Big 12 title game, also scheduled for Saturday. The Cyclones fell short of the conference championship with a loss at Texas two weeks ago while Incarnate Word reached the FCS postseason.

Since Iowa State had already become bowl eligible, it reached back out to the Bulldogs.

Drake coach Rick Fox took his captains to gauge the level of interest, and the team's answer after a players-only meeting was a resounding yes.

Iowa State said that it'll announce how much it will compensate Drake for the game at a later date.

"They couldn't contain themselves, they were so excited," Fox said. "They said, 'We're all in.'"

Drake has had a nice season, going 7-3 and 6-2 in the Pioneer Football League, generally considered the best of the non-scholarship leagues. Fox said many of his players had opportunities to play for at least some scholarship money at the Division II, FCS or even FBS level before choosing Drake for its academics.

The Cyclones finished with their best-ever record in the Big 12 (6-3), and the closest thing to an FBS team that Drake saw all season, FCS power Montana, beat the Bulldogs 48-16.

According to Clayberg, getting to spend one more Saturday with his teammates is well worth it — even if the Bulldogs get thrashed.

"People aren't stupid. They're a top (25) team in the FBS," said Clayberg. "But we're Division I football players, too. It's not like we're just a bunch of nerds running out there."