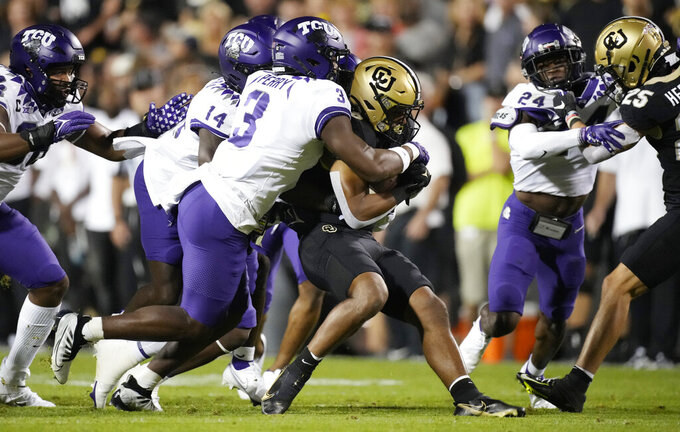 FILE - TCU safety Mark Perry (3) sacks Colorado quarterback Brendon Lewis (12) in the first half of an NCAA college football game Friday, Sept. 2, 2022, in Boulder, Colo. Transfers have made major impacts around the Big 12, none more than at surprising unbeatens TCU and Kansas. (AP Photo/David Zalubowski)

While Kansas State's Martinez might be the conference's most celebrated transfer after the first month of the season, it's been lesser-known transfers who have been big difference-makers for the surprise teams at the top of the Big 12 standings.

When No. 17 TCU (4-0, 1-0 Big 12) visits No. 19 Kansas (5-0, 2-0) on Saturday, a combined eight starters and several key backups will be first-year players for the Horned Frogs and Jayhawks after having played at other schools.

The move to TCU has proved to be a welcome change for Hodges, who said the stringent academic and military training regimen at Navy along with football obligations made his daily schedule “insane.”

“I just feel like I’m a different player than I was when I was at Navy,” Hodges said. “I’m 20-25 pounds heavier, faster, stronger, more confident. Everyone wants to win. Everyone’s having a good time. We have fun at practice. I’m much more loose and having much more fun than I had in the past couple of years.”

The change of scenery also has rejuvenated Martinez, who struggled with uneven performances and turnovers in four losing seasons at Nebraska. He's run for seven of his Big 12-leading nine touchdowns the past two weeks against Texas Tech and Oklahoma.

Martinez said he had been tentative in early games and got a pep talks from coach Chris Klieman and offensive coordinator Collin Klein after a 17-10 home loss to Tulane.

“They challenged me, and I felt like I needed that,” Martinez said. “And their vote of confidence was huge, not only from them but from my teammates.”

BAYLOR: NT Jaxon Player (Tulsa), one of only three transfers, has started one of five games and split time with Siaki Ika. He has eight tackles, four for loss.

IOWA STATE: LB Colby Reeder (Delaware) is second on the team with 23 tackles and is one of two Big 12 linebackers with two interceptions. He also has a team-best five quarterback hurries.

KANSAS: DE Phelps (Miami, Ohio) has had no problem transitioning to a Power Five team after making the All-Mid-American Conference second team at last year. Pro Football Focus credits him with six sacks, one more than his official total.

KANSAS STATE: QB Martinez is the No. 4 rusher in the Big 12 at just under 94 yards per game. He has no turnovers in 336 snaps after committing a nation-high 48 (30 interceptions, 18 fumbles) in four seasons at Nebraska, according to Sportradar.

OKLAHOMA: QB Gabriel (Central Florida) has completed 64% of his passes for 243 yards per game and thrown for 11 touchdowns with no interceptions. He went into the concussion protocol after getting hit in the head and leaving last week's game against TCU.

OKLAHOMA STATE: OL Jason Brooks (Vanderbilt), one of three transfers, has settled in as the No. 2 right tackle and has allowed no sacks or hurries in 67 pass-protection snaps, according to PFF.

TCU: LB Hodges (Navy) leads the Horned Frogs with 25 tackles, three for loss and 1.5 sacks. He made a season-high 10 stops against Oklahoma.

TEXAS: CB Ryan Watts (Ohio State) gets the nod over QB Ewers (Ohio State), who has missed the last three games with a clavicle injury. Watts has started all five games and made 22 tackles and broken up three passes.

TEXAS TECH: OL Monroe Mills (Oklahoma State) has started all five games at right tackle and allowed no sacks. He was on the field for 103 of 106 plays against Houston and all 102 plays against Texas, not counting extra-point and field-goal attempts.

WEST VIRGINIA: QB Daniels (Georgia) is putting up decent numbers in an otherwise disappointing start to the season for the Mountaineers. He has 16 passes that have gone for at least 20 yards and is completing 64% for 244 yards per game.