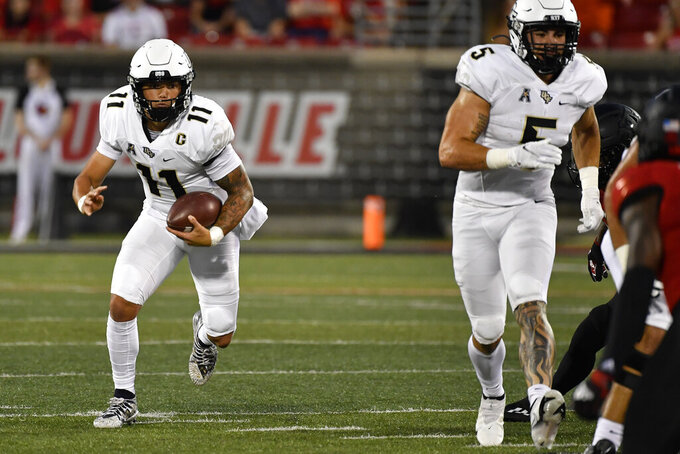 Central Florida quarterback Dillon Gabriel (11) runs through an opening in the Louisville defensive line during the first half of an NCAA college football game in Louisville, Ky., Friday, Sept. 17, 2021. (AP Photo/Timothy D. Easley)

ORLANDO, Fla. (AP) — Central Florida quarterback Dillon Gabriel will be out indefinitely after suffering a broken clavicle on the final play of the Knights’ loss Friday night to Louisville.

UCF (2-1) announced Saturday that Gabriel would not need surgery, but it gave no timetable for his return. The junior is one of the top quarterbacks in the country.

He led the nation in yards passing last season and completed 68.7% of his passes for 814 yards and nine touchdowns.

Gabriel was injured with the Knights trailing by a touchdown in the final seconds deep in their own territory as they tried to make a desperation lateral play. He was slammed to the turf on his left throwing shoulder while trying to keep the ball alive.