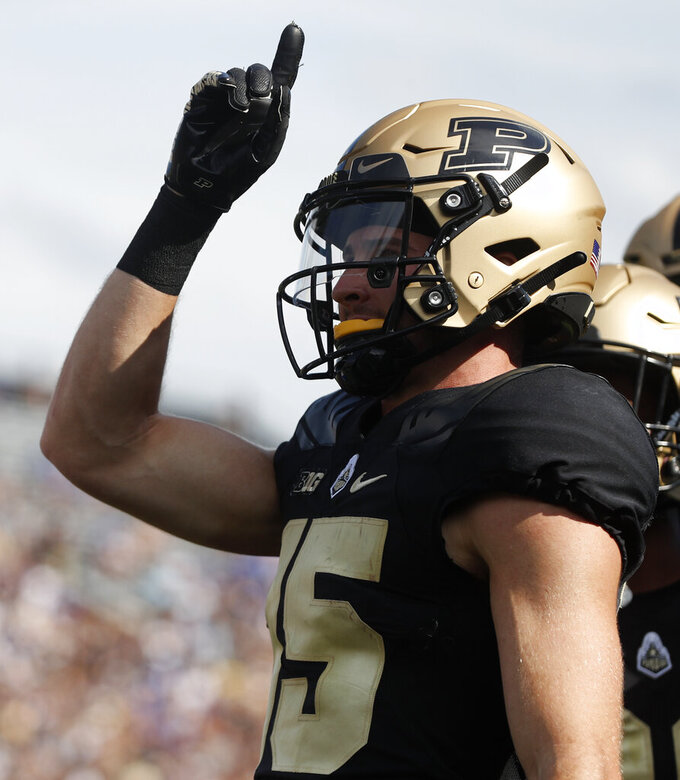 Line: Syracuse by 1 1/2, according to FanDuel Sportsbook.

This is a game that could impact Syracuse's hopes for its first bowl bid since 2018. The Orange folded last season with three straight losses and came up a win short of qualifying for the postseason. This is the second of five home games in the first six for Syracuse, which has dominating wins over Louisville and UConn. The Boilermakers bounced back from an opening loss to Penn State with a easy victory over Indiana State of the Championship Subdivision.

Syracuse defense against Purdue's duo of QB Aidan O’Connell and WR Charlie Jones. The Orange have shut down their first two opponents. Purdue is a bigger challenge. O'Connell has thrown for five touchdowns with no interceptions. Jones has been dominant since transferring from Iowa to rejoin O'Connell, his friend since childhood. Jones needed only six quarters to match his 2021 total of 21 receptions for Iowa.

Purdue: WR Charlie Jones. He has provided an instant impact in his first two outings for the Boilermakers. Jones leads the Big Ten in receptions (21), receiving yards (286) and receiving touchdowns (4), and he leads the nation in receptions per game (10.5).

Purdue RB King Doerue, who ran for 232 yards against overmatched Indiana State, is out for Syracuse with an injured calf. ... Syracuse is the only FBS school that has converted all of its red zone chances and not allowed a score from the red zone. The Orange have seven TDs and three field goals in 10 trips inside the opponent's 20-yard line ... The two coaches — Purdue's Jeff Brohm and Syracuse's Dino Babers — made their FBS head coaching debuts against one another in 2014. Brohm and Western Kentucky won that contest 59-31 over Bowling Green. ... Saturday will be Purdue's first trip to the newly renamed JMA Wireless Dome. ... Syracuse TB Sean Tucker has had two 100-yard rushing games this season to boost his career yardage total to 2,334. ... Purdue LB-S Jalen Graham will miss his second straight game since fracturing a tibia.