Undefeated No. 12 Cowboys bring defense to meet No. 25 Texas 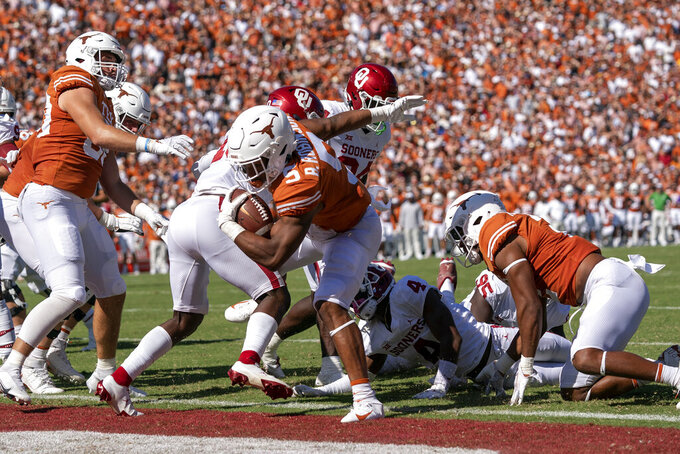 Texas running back Bijan Robinson (5) steps into the end zone against Oklahoma during the first half of an NCAA college football game at the Cotton Bowl, Saturday, Oct. 9, 2021, in Dallas. (AP Photo/Jeffrey McWhorter)

Line: Texas by 4 1/2, according to FanDuel Sportsbook.

The Cowboys need a win to stay atop the Big 12 and prove they really are worthy of that lofty ranking. Texas needs a win to stay on pace for a possible rematch with Oklahoma in the Big 12 title game. Texas running back Bijan Robinson also wants to keep his name in the Heisman conversation.

Texas has reshuffled its offensive line after it was pushed around in the second half against Oklahoma and needs to create space for Robinson to run. The Cowboys think they can manage the point of attack to contain the Texas run game and let linebacker Malcolm Rodriguez, their tackling leader the last two seasons, do his thing.

Oklahoma State: Quarterback Spencer Sanders is a problem for defenses with his ability to improvise on the run and turn any breakdown into a big play. He also has a tendency for turnovers. He had three in last season's loss to Texas. He threw three interceptions against Baylor two weeks ago.

Texas: Freshman Xavier Worthy has become the X-factor for the Texas offense with five touchdown catches in the last three games. He's the deep threat that can rip a defense focusing on Robinson.

Texas ranks No. 106 nationally in total defense and has twice surrendered more than 300 yards rushing in a game ... Robinson averages 131.5 yards rushing per game. Cowboys running back Jaylen Warren averaged 155 yards and 32 carries over the previous three games. ... An OSU win would mark the first time the Cowboys have beaten three consecutive ranked opponents.