Undefeated season over, No. 14 BYU regroups for San Diego St 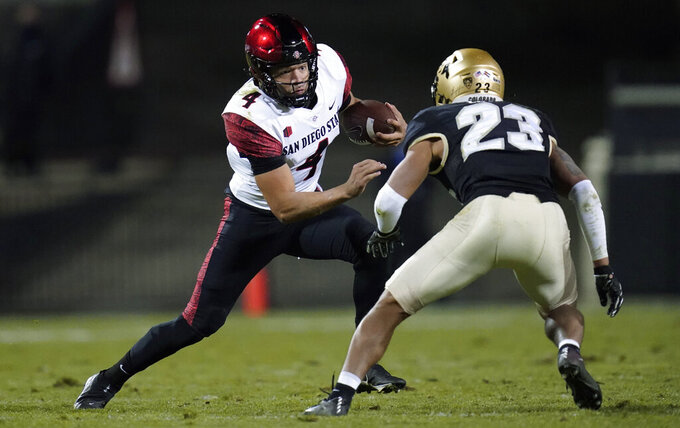 Zayne Anderson and some of his BYU teammates watched the game film in the hotel lobby immediately after it was over. They thought about it on the plane ride back to Provo, Utah.

Just one yard from staying perfect.

No. 14 BYU tries to pick up the pieces after seeing their undefeated season tackled on the 1-yard line in a 22-17 loss at No. 11 Coastal Carolina last weekend.

The ideal incentive may be showing up at LaVell Edwards Stadium on Saturday night: San Diego State, which just so happened to beat the Cougars 13-3 last season.

That still stings, too.

“Everyone that was part of that game really wants to go out there and redeem ourselves from last year,” said receiver Dax Milne, who was wrapped up by Coastal Carolina a yard away from scoring. “We really respect their defense. We’re excited to go back out on the field.”

The Cougars (9-1, No. 18 CFP) had an open date last week and were beginning preliminary preparations for San Diego State (4-3) when things quickly fell into place for a matchup with Coastal Carolina. Soon after, the Cougars traveled more than 2,200 miles to South Carolina to face the Chanticleers (10-0, No. 13 CFP).

No regrets over playing on the road with such short notice, either.

“You’re asking a guy that loves to coach, and you’re asking a team that loves to play football if they’d like to play a game? Yes,” BYU coach Kalani Sitake said. “If there’s a chance we could play doubleheader and back-to-back games, I’d take that."

For the Aztecs, there's not too much on offense they can borrow from Coastal Carolina's blueprint. The Chanticleers are more of an option-style team.

“From a scheme standpoint, that’s not us, the quarterback runs and that kind of stuff,” said Aztecs coach Brady Hoke, whose program hasn’t won in Provo since 2000. “We’ll be looking at personnel and evaluating personnel. They're an awfully good football team.”

And one with a big chip after last season's loss to SDSU coupled with last week's loss to Coastal.

“We have a sour taste in our mouth,” Anderson said. “This is a really good team and a really good opportunity to bounce back. We didn’t play our best game last week. The best thing we can do is come out and show what team we really are, what team we’ve shown we are all season.”

This could very well be BYU junior quarterback and Heisman hopeful Zach Wilson’s final home game. He may decide to enter the NFL draft.

Wilson has thrown 27 TD passes this season, which is tied for third in the nation.

“A very talented quarterback,” said San Diego State cornerback Darren Hall, who has an interception in three straight games. “He's agile. He's mobile. ... We’re going to go out there and try to do what we can do to stop his team.”

Anderson will be among the 15 seniors honored as they’re set to play what could be their last home game. Due to COVID-19 restrictions, only the families of players and coaches are permitted to attend.

“I’ve been here a long time, but it’s crazy how fast it’s gone,” said the safety/linebacker, who began in 2015 and dealt with injuries over a career that’s included 48 games played. “I’ve given everything my all the whole time.”

The Aztecs took note of the decision made this week to postpone the inaugural LA Bowl, which was to feature teams from the Mountain West and Pac-12. The postponement leaves the Mountain West with two bowl ties — the Famous Idaho Potato and Arizona bowls.

San Diego State has been to 10 straight bowl games.

“We’re focused on this weekend and whatever happens after that, happens,” Hall said.

The forecast for Saturday night in Provo is calling for temperatures that could dip into the single digits and a chance of snow.

“I miss the cold. I’m from New Mexico,” said San Diego State returner Jordan Byrd, who was named the league's special teams player of the week after a 93-yard kickoff return against Colorado State. “It’s going to be really good, especially feeling the coldness again.”

The Cougars will break out their all-black uniform with royal blue trim for the game. The last time the team wore that ensemble was in 2016 against Utah State.