Under Golden, No. 5 Notre Dame readies its defense 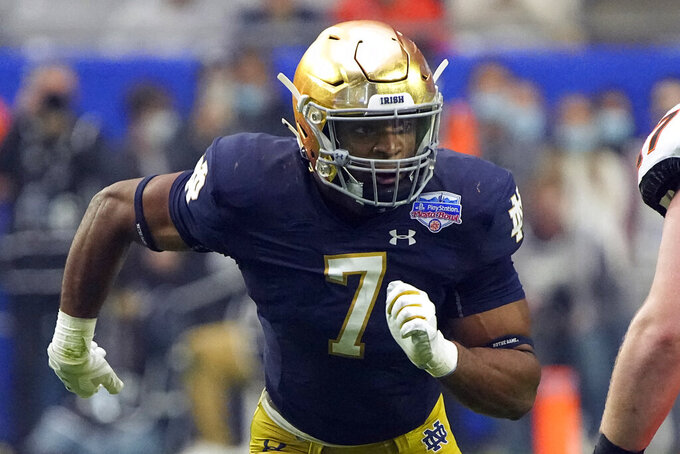 New Fighting Irish coach Marcus Freeman, Golden's predecessor, concurred. With Golden taking over as the team's third defensive signal-caller in three years, Freeman opted for continuity over change, especially after the unit showed so much promise in 2021.

“We’re trying to keep some consistency in what we’re doing,” Freeman said. “There obviously have been some enhancements because of coach Golden’s experience being a defensive coordinator and being in the NFL. But the basis of what we’re going to do is not going to change.”

After making the 2020 College Football Playoffs, the Fighting Irish took a significant step forward by producing 41 sacks, 26 takeaways and finishing 15th nationally in points allowed (19.7 per game) during Freeman's first and only season as coordinator.

If the Irish can replicate those numbers, No. 5 Notre Dame could be back in the playoff hunt.

The mantra is simple: Play fast, play free. And the 53-year-old Golden intends to stick to the script.

Golden brings a solid track record to South Bend. A successful tenure as Virginia’s defensive coordinator led to head coaching jobs at Temple and Miami before he went to the NFL. He coached linebackers with the Detroit Lions and was part of the Cincinnati Bengals' Super Bowl run last season.

The cupboard is far from bare as the Irish prepare to open the season No. 2 Ohio State on Sept. 3.

Preseason AP All-American Isaiah Foskey decided to return to school rather than pursue an NFL career after leading the Irish with 11 sacks while forcing six fumbles. The 6-foot-5, 265-pound defensive end is the anchor of the front seven.

“I feel I need to be more vocal as a leader,” he said.

Defensive end Rylie Mills will start on the opposite side after registering three sacks in 2021 and they will be backed up by upperclassmen Justin Ademilola, Jordan Botelho, Alex Ehrensberger and Nana Osafo-Mensah.

"A Harvard grad who is playing at Notre Dame?” Golden chuckled. “He’s really strong – a good anchor in there.”

Plus, senior Marist Liufau is healthy again after missing the 2021 season with a broken ankle and Botelho could see action at linebacker where everyone has learned to play multiple positions under Golden and James Laurinaitis, Freeman's former teammate with Ohio State.

“Coach Freeman has encouraged us to do that so we have more depth,” Golden said.

Add All-American Brandon Joseph, who had six interceptions at Northwestern in 2020, to the mix and the Irish secondary could be even stronger despite losing star safety Kyle Hamilton to the NFL.

“Brandon is a natural leader,” Freeman said. “He’s confident, which is extremely important, and he’s made plays and he’s very vocal making checks.”

It will be a tough combination to match — one Freeman, understandably, wants to keep together.