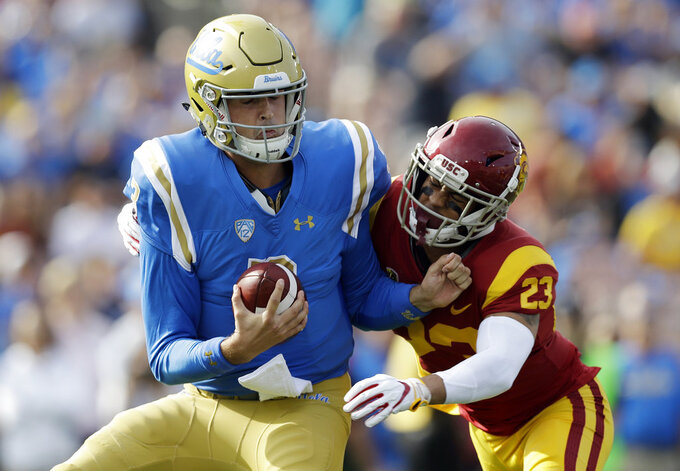 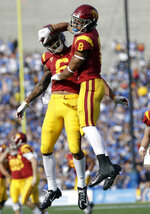 PASADENA, Calif. (AP) — Less than two years ago, Clay Helton left the Rose Bowl field in triumph after leading Southern California past Penn State in one of the most thrilling bowl games ever played.

The Trojans' head coach left the same field Saturday by walking underneath a red-lettered sign reading "HELTON OUT. TIME FOR CHANGE."

Helton still had his job as he left Pasadena following USC's 34-27 loss to struggling UCLA, the fourth loss in five games overall for the Trojans (5-6, 4-5 Pac-12). But disgruntled USC supporters chanted for his firing during the game, and more fans shouted insults at him while he walked up the tunnel to a somber locker room.

The coach spoke in the locker room with athletic director Lynn Swann, and Helton said he got no indication a coaching change is imminent at the West Coast's premier program.

"He just hugged my neck in there and said, 'Coach, see you Monday,'" Helton said. "Look forward to it.'"

Helton has repeatedly said he doesn't expect to lose his job this season, and Swann has backed him in public. But just two seasons after that Rose Bowl triumph, and just one season after a Pac-12 title capped the best two-year stretch to start a coaching tenure in USC history, even the folksy Texan realizes his job security looks tenuous from the outside.

"It doesn't bother me," Helton said of the vociferous boos and taunts from USC's fans at the Rose Bowl. "My main heartbreak is for our seniors, because I wanted it for them. I know the job. The job is if you win, people are going to pat you on the back, and if you lose, you know they're going to get after you. If you don't like it, don't be in this profession. I know it. It rolls off my back, so I'm not worried about it."

With its season in tatters, USC would have to upset unbeaten Notre Dame next weekend just to become bowl-eligible. The Trojans haven't had a seven-loss regular season since 2000, coach Paul Hackett's final year before Pete Carroll took over and started a renaissance.

Helton expects to be on the sideline to face the Fighting Irish.

"I live just like I told you: I work my butt off every 24 hours to try to buy another 24," Helton said. "If you work as hard as you can and do the best job you can for your kids and for the university you love, you have no regrets, and I don't. I'll continue to work as hard as humanly possible. I've got great support from USC, from Lynn Swann and from these kids, and I owe it to them to work as hard as I can for them."

Just 9 1/2 months ago, Helton received a contract extension through the 2023 season. The deal from Swann was a reward for winning a school-record 21 games in his first two seasons, including that epic Rose Bowl triumph and the Trojans' first Pac-12 title since 2008.

USC's loss to the rival Bruins was the most damaging blow yet to the longtime offensive assistant who took over a team engulfed in turmoil midway through the 2015 season and eventually led it to remarkable heights, only to see it all crash down in the past three months. The Trojans were terrible offensively in early-season losses to Texas and Stanford before their current 1-4 skid.

Even his detractors must admit Helton has given stability to a turbulent program and provided adult leadership at a school sorely lacking it in recent years.

But while the Trojans were winning big over the past two years, a large segment of USC fans still never bought into Helton, who had never been a head coach before replacing Steve Sarkisian. They critiqued his offensive imagination, his choice of assistants and even the incongruity of his Southern style in the heart of California.

As the losses pile up, the boos have only grown louder at a school trying to sell tickets and suites at the renovated Coliseum next season.

Many fans point out that Helton's Trojans have largely struggled whenever Sam Darnold wasn't Helton's quarterback, and freshman passer J.T. Daniels had another rough game at the Rose Bowl, going 20 of 34 for 337 yards and two costly interceptions.

Daniels, the nation's top prep quarterback last season, gave impassioned postgame support for the coach who recruited him out of Orange County.

"Nobody wants to see him go," Daniels said. "Everybody here that knows him loves him. If you blame Clay Helton for that loss, then you have no idea what football is. There's things that players aren't executing, and that's it. The players' part of the ballgame is to make the plays. We have the opportunity."