USC's Helton "happy for" Kingsbury after Cardinals swoop in 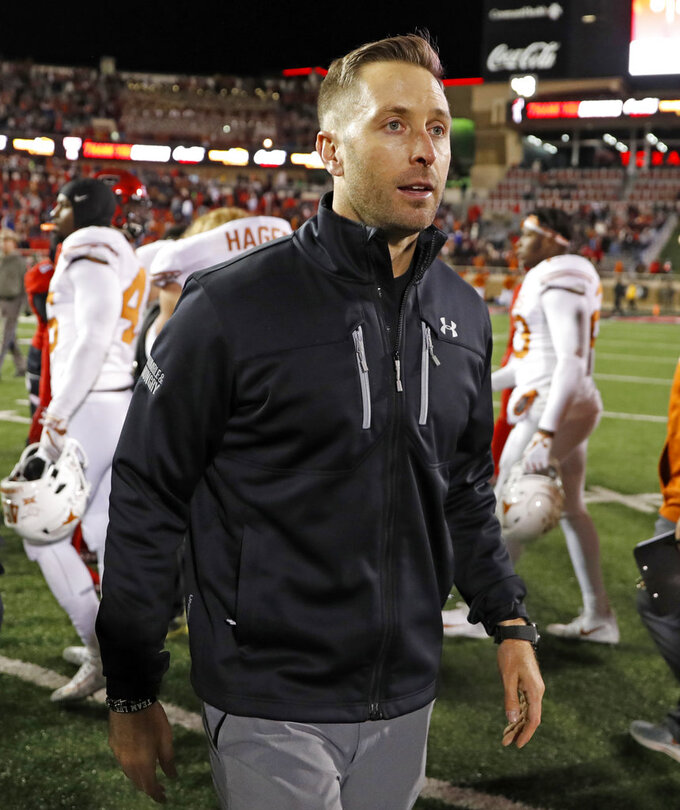 FILE - In this Nov. 10, 2018 file photo Texas Tech coach Kliff Kingsbury walks off the field after the team's NCAA college football game against Texas in Lubbock, Texas. The Arizona Cardinals have hired Kingsbury, a move aimed at providing guidance for young quarterback Josh Rosen and resuscitating the worst offense in the NFL. The Cardinals announced the hiring Tuesday, Jan. 8, 2018 after a long interview earlier in the day. (AP Photo/Brad Tollefson, file)

Kingsbury became the Cardinals' head coach and left the Trojans in the lurch Tuesday, leaving LA just over one month after he agreed to take charge of USC's offense. The former Texas Tech coach's abrupt departure throws USC right back into turmoil, but Helton was graceful and conciliatory in a brief statement.

"I am happy for Kliff," Helton said. "Any time you get an opportunity to be an NFL head coach, it is special. He is a talented coach. That's why we brought him here. I wish him nothing but the best."

Still, USC is back where it started last month when athletic director Lynn Swann justified his much-criticized decision to keep Helton in charge after the Trojans' first losing season since 2000 by pairing him with Kingsbury, one of the top offensive minds in college football.

Finding a replacement for Kingsbury could take several weeks, according to Helton. Some top candidates for similar jobs already have been snapped up, but Helton betrayed no public worries about solving his latest problem with the tumultuous Trojans.

"USC has always attracted the best coaches in the country from all levels," Helton said. "We will spend the upcoming weeks finding the best possible fit for USC and our program."

Helton and Kingsbury hadn't made any major hires of Kingsbury's offensive assistants, so the Trojans are also without an offensive line coach, a quarterbacks coach and an outside receivers coach.

But the Trojans thought they had landed the ideal coach to take over an offense that ranked 91st in the FBS in scoring and 11th in the Pac-12 in yardage last season. They patiently pursued Kingsbury as their top choice after his firing at Tech, luring him with USC's seemingly endless supply of five-star talent and the chance to showcase his skills for another big job.

Instead, that job arrived before anyone apparently expected — and was bigger than most observers thought possible, with the Cardinals making an unconventional hire of a college head coach coming off three straight losing seasons and a 35-40 overall record.