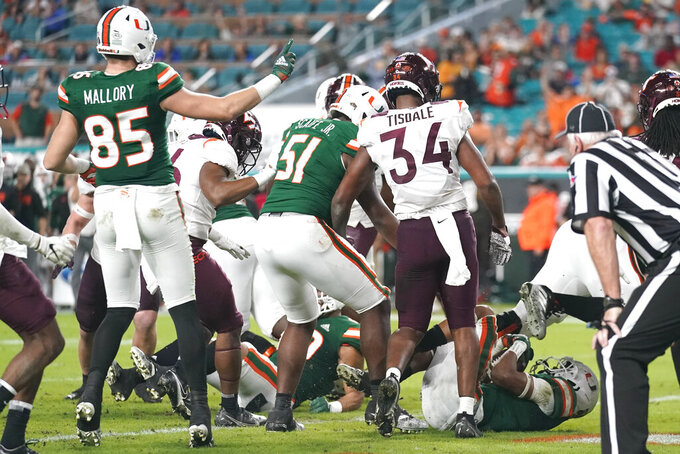 MIAMI GARDENS, Fla. (AP) — Time had expired in the rainiest game of Miami's season, and a few Hurricanes sprinted off their sideline before taking celebratory headfirst slides across a completely soaked, slicked and muddied field.

The Hurricanes weathered a storm — and a stormy week.

Tyler Van Dyke passed for 357 yards and three touchdowns, the last of them a 55-yarder to Mike Harley with 10:39 remaining, and Miami secured bowl eligibility by holding off Virginia Tech 38-26 on Saturday night.

“We've got an 11-week resume and there's a lot of things on the resume we don't like. That's for certain," Miami coach Manny Diaz said. “But 11 times out of 11, we've brought it and our guys have competed. They've played hard for each other."

Miami (6-5, 4-3 Atlantic Coast Conference) was coming off a last-second loss last week to rival Florida State, the firing of athletic director Blake James on Monday and knows the speculation about Diaz's job security has never been more hotly debated.

“We still fought. Everybody came together, fought for the seniors and this was just a great way to send them out," Van Dyke said.

Will Mallory also caught a scoring pass for Miami and Jaylan Knighton had two short touchdown runs for the Hurricanes. Mallory had a 72-yard touchdown called back as well and Van Dyke completed 19 of 33 passes.

Connor Blumrick had two touchdown passes for Virginia Tech (5-6, 3-4), along with a team-best 132 rushing yards in the debut of interim coach J.C. Price — who filled in for former coach Justin Fuente, who parted ways with the school on Tuesday.

“Nobody panicked, nobody flinched at halftime," Price said. “In the middle of the third quarter, beginning of the fourth, we still felt on the sidelines that we were going to win the game. It just didn’t happen.”

Van Dyke — who also had a 75-yard touchdown throw to Brashard Smith — became the first Miami quarterback with multiple TD passes of at least 55 yards in an ACC game since Brad Kaaya did it against Duke on Nov. 26, 2016.

“That pass right there sealed the deal," Harley said of his 55-yard grab that closed the scoring. “My last touchdown in Hard Rock as a ‘Cane. It meant a lot. It meant a lot."

Starting quarterback Braxton Burmeister also had a scoring throw for the Hokies, who were down 15 at the half and 18 in the third before a successful onside kick helped them string together back-to-back touchdowns to get within five.

Tre Turner, Da’Wain Lofton and Kaleb Smith had TD grabs for the Hokies.

For the Hurricanes, at least it was a winning end to a few tough days — and Van Dyke topped the 300-yard passing mark for a fifth consecutive game. He's passed for 1,813 in that span, with Miami going 4-1 in that stretch.

For the Hokies, bowl eligibility now hinges on next week’s regular-season finale at rival Virginia.

Virginia Tech: The Hokies got into a 21-3 early hole, in part because their offense was slow to get rolling. Burmeister completed his first seven passes, but only for a total of 16 yards. In order, those completions went for zero, three, two, four, minus-1, three and five yards.

Miami: The Hurricanes honored 24 seniors in a pregame ceremony before the final home game of the regular season. Among the honorees: injured QB D’Eriq King, and DE Zach McCloud — who extended his Miami school record by playing in his 63rd career game.

Turner had a spectacular scoring catch, adding to a most memorable trip for him. He is dealing with a respiratory issue and Virginia Tech’s medical staff wouldn’t allow him to fly to the game — a devastating blow for the receiver, since he’d been picked to wear No. 25 for the game, the Hokies’ most revered number. So, he and two Hokies staffers made the 13-hour drive to the game, which he chronicled on Twitter, replete with a shoutout to Five Guys.

Miami WR Charleston Rambo finished with seven catches for 116 yards. He became the fifth Miami receiver to record a 1,000-yard season — he’s now at 1,070 — and he’s up to 71 catches for the year. That’s one away from the Hurricanes’ single-season record of 72 set by Leonard Hankerson in 2010. Allen Hurns’ school record for yards in a season, 1,162 in 2013, is well within reach as well.