Virginia brings momentum into matchup with solid BC team 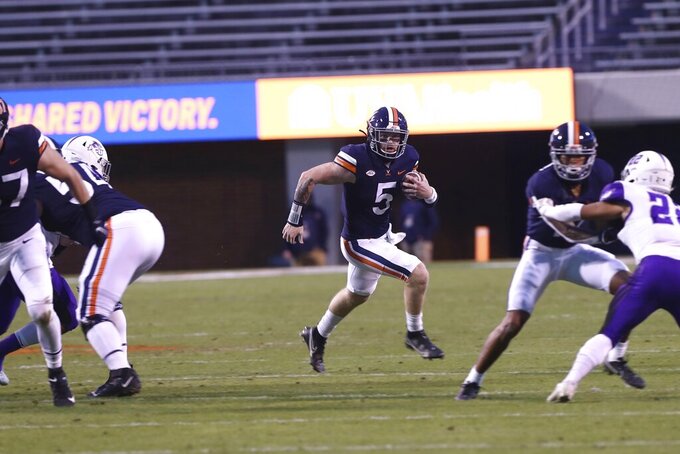 Virginia brings plenty of momentum into Saturday's matchup with Boston College, which may be playing its last game of the season.

But the Eagles have hardly been pushovers under first-year coach Jeff Hafley.

The Cavaliers (4-4, 3-4 Atlantic Coast Conference) have rallied behind quarterback Brennan Armstrong, who missed two games (both losses) and part of a third with a concussion earlier in the season. He has thrown for 10 touchdowns with two interceptions in the last four games while adding a running threat to the mix.

Armstrong is coming off a 383-yard, four-touchdown passing performance, including three scoring throws of 52 yards or more, in a rout of Abilene Christian. He has also rushed for at least 52 yards in each of the last four games.

“I marvel sometimes just at that arm strength and some of the throws that he makes in some of the windows that he throws them into,” coach Bronco Mendenhall said this week. “And his confidence and how fast he makes decisions. So I’ve seen glimpses of all that but not at the same volume. And so I’ve been really impressed just with the decision-making, the accuracy and arm strength.”

The Eagles (6-4, 5-4) are finishing their season on schedule, unusual in this pandemic-affected year for college football, but a postseason berth is uncertain.

All of BC's losses have come to opponents that were ranked at the time, and the Eagles were competitive against then-No. 1 Clemson and No. 2 Notre Dame.

“If we could finish 6-4 in the ACC, it would be a nice way to send out the seniors, good momentum going into the offseason, and just a lot to build off of,” Hafley said. "Regardless, I’m already proud of the guys and how they’ve fought.

Here are some things to watch when Boston College visits Virginia:

The Eagles are 6-0 against Virginia, including 4-0 since they joined the ACC. Their last meeting was a 41-10 beatdown in Scott Stadium in 2017.

Virginia freshman WR Lavel Davis Jr. has five touchdown catches in as many starts, including a 90-yarder last weekend. He leads the ACC with an average of 26.7 yards per reception.

The Eagles haven’t had a single positive COVID-19 test since intake testing over the summer. That’s helped them become one of five Power Five teams to have played 10 games already.

“That is the hardest thing we’ve had to deal with,” Hafley said. “It’s not just our football team, I think that our campus has done a great job too. You’ve got to give a lot of credit to everybody around here, certainly our players.”

Hafley, who was an Ohio State assistant when BC hired him last Dec. 14, is coming up on his one-year anniversary in Chestnut Hill. It’s been a strange one.

A year ago, the second-ranked Buckeyes had just beaten archrival Michigan and were preparing for the Big Ten championship game against Wisconsin. After Hafley was hired, he still had to coach Ohio State in the College Football Playoff, where it lost to Clemson.

Then came a season that wasn’t like anyone could have expected. Spring ball was interrupted, and Hafley met his players through Zoom. Much of the recruiting was also done remotely.

“This season has been more special than I could have ever imagined,” said Hafley, whose six wins are the most for a first-year BC coach. “I’ll never forget that first win when no one thought we would play. I’ll never forget any of the moments that we’ve had in the locker room after these hard wins when people didn’t know if we would play. ... I think it all happened for a reason.”