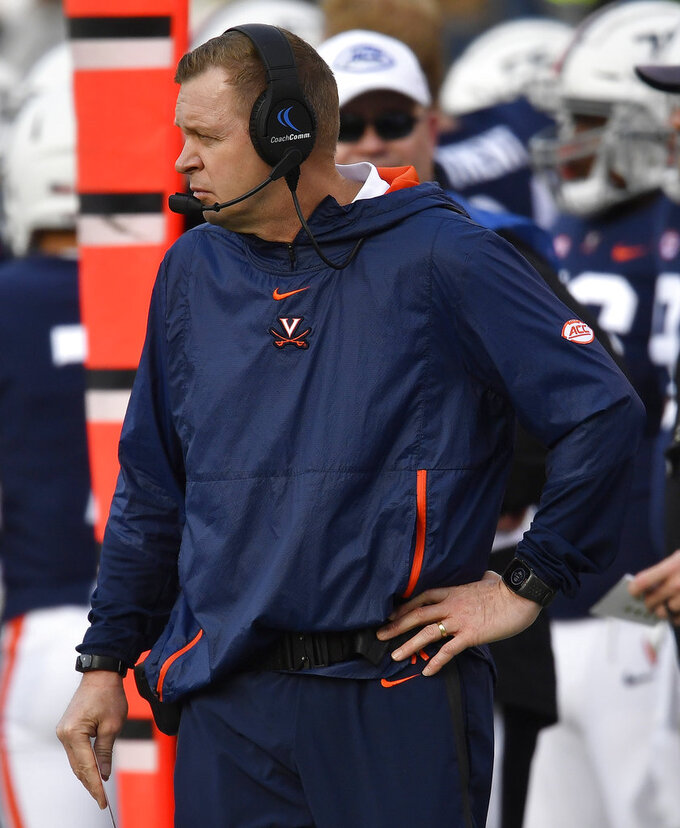 Virginia coach Bronco Mendenhall is embracing the importance of this week's game against Virginia Tech.

The Cavaliers (7-4, 4-3 Atlantic Coast Conference) finish the regular season in Blacksburg on Friday against the Hokies (4-6, 3-4). The game for the Commonwealth Cup has taken on added importance for both programs in recent days.

The Hokies have won 14 straight in the series and need to make it 15 in a row to have any chance of extending their 25-year bowl streak, the longest recognized by the NCAA. Virginia Tech also upped the ante a bit on Sunday, announcing that it will play Marshall on Dec. 1 seeking bowl eligibility, but only if it can first beat Virginia.

Mendenhall listed beating Virginia Tech as one of the program's primary goals at the start of the season, and his players have taken that message to heart.

"I basically said everything that they're doing that's not involved in going to class or winning this game is actually not going to help us," he said. "I did give them a choice. I think it gives our team the best chance to be focused, prepared and ready to play the way they'll need to play in a very difficult environment against a good team."

In his first two seasons, Mendenhall was not as blunt about his team's need to beat the Hokies, but with the progress they have made in his third season, he said he saw no reason to understate its importance.

"It's not just another game," he said. "Virginia hasn't won the game in a significant amount of time. It's an in-state rival game. It's hard to take over a conference until you take over your own state, and certainly then your side of the division. So to say it's just another game, I think we all realize the implications aren't just normal implications. They're at a higher level. So, again, my approach has always been just to state the brutal facts."

The facts from the Hokies standpoint have not been great of late. They will come into the game on a four-game losing streak and having lost four straight at home, but right guard Braxton Pfaff said beating Virginia and getting the seniors another home game would allow them to put the troubles of the difficult month behind them.

"We're not focused on anything that's happened this last month," said Pfaff, a redshirt senior. "It's been terrible, but this week, this weekend, this win could just erase all that negative things that have happened."

The negatives continued on Monday when wide receiver Sean Savoy announced his intention to transfer. The announcement came one day after redshirt freshman linebacker Rico Kearney said that he, too, is transferring.

"I'll tell them that we're in playoff football," Fuente said. "If we win, we get to play again. If we don't, we're done."